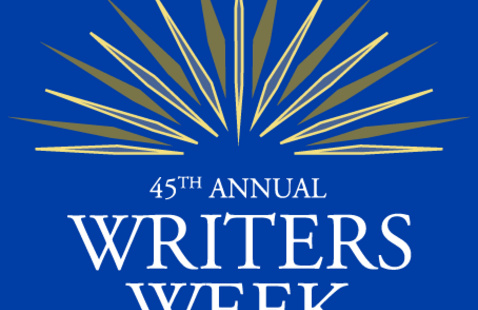 Writers Week is the longest-running, free literary event in California and features the most renowned authors of our day alongside those at the start of promising careers. writersweek.ucr.edu

ONLINE. Free and open to the public.

The 45th Writers Week 2022 is made possible by support from:

Books will be available for purchase from our own campus Barnes & Noble College Bookstore and Cellar Door Books, our recommended local independent store.

The Writers Week emblem, designed from the Agave americana Marginata in our local flora, was created to demonstrate our support for initiatives that create a more sustainable campus, community, and state that includes indigenous plants on campus and region. We also support the work of the UCR Office of Sustainability and the UCR Botanic Gardens.

We acknowledge that the land on which we gather is the original and traditional territory of Tongva people [Tongva and Cahuilla people] and within Tongva, Cahuilla, Luiseño & Serrano original lands and contemporary territories.

In the spirit of Rupert and Jeanette Costo’s founding relationship to our campus, we would like to respectfully acknowledge and recognize our responsibility to the original and current caretakers of this land, water and air: the Cahuilla, Tongva, Luiseño, and Serrano peoples and all of their ancestors and descendants, past, present and future. Today this meeting place is home to many Indigenous peoples from all over the world, including UCR faculty, students, and staff, and we are grateful to have the opportunity to live and work on these homelands. Please also visit our university founder's legacy page, Cahuilla Scholar Rupert Costo, California Indian Studies & Scholars Association, UCR's California Center for Native Nations, Native American Student Programs (NASP), and the page of UCR's Rupert Costo Chair, Dr. Clifford Trafzer.

Statement of Solidarity with the Asian American Pacific Islander Community

We are grieved by the recent killings in Atlanta, as well as by all other anti-Asian bigotry and violence, and stand in solidarity with our AAPI colleagues, students, and, more broadly, all AAPI across the nation. We stand against all anti-AAPI hate crimes, discrimination, and dehumanization, knowing that the group Stop AAPI Hate has reported 3,975 hate incidents against Asian Americans between March 19, 2020 and February 28, 2021.

We stand in solidarity with Black Lives Matter. The brutal killings of George Floyd in Minnesota, Breonna Taylor in Kentucky, and Ahmaud Arbery in Georgia are part of a pattern of state violence against Black people, which too often remains invisible and unpunished, when it is not blamed on the victims themselves.

The nationwide protests we are witnessing are an expression of anger at police violence, a rejection of white supremacy, and a call to our leaders that they live up to the nation's founding proclamation of equality. We demand accountability from the police, disinvestment from law enforcement in favor of education, housing, and community services, and, above all, justice for the victims.

Please register to attend at writersweek.ucr.edu