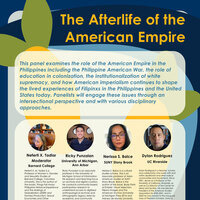 The Afterlife of the American Empire

This panel examines the role of the American Empire in the Philippines including the Philippine American War, the role of education in colonization, the institutionalization of white supremacy, and how American imperialism continues to shape the lived experiences of Filipinos in the Philippines and the United States today. Panelists will engage these issues through an intersectional perspective and with various disciplinary approaches.

Neferti X. M. Tadiar is Professor of Women’s, Gender, and Sexuality Studies at Barnard College, Columbia University. She is the author of the books, Things Fall Away: Philippine Historical Experience and the Makings of Globalization (2009) and Fantasy-Production: Sexual Economies and Other Philippine Consequences for the New World Order (2004). Her new book, Remaindered Life (Duke University Press, 2022), is an extended meditation on the disposability and surplus of life-making under contemporary conditions of global empire. Professor Tadiar is the Director of the Alfredo F. Tadiar Library in San Fernando, La Union, Philippines.

Ricky Punzalan is an associate professor in the University of Michigan School of Information. His research and teaching focus on archives and digital curation. He conducts community-based, participatory research to understand access to digitized anthropological archives and ethnographic legacy data by academic and community users. He currently co-directs ReConnect/ReCollect: Reparative Connections to Philippine Collections at the University of Michigan, a project that develops the framework for, and the practice of, reparative work for Philippine collections acquired by the University during the U.S. colonial period. His work has been published in American Archivist, Archival Science, Archivaria, International Journal of Digital Curation, and Library Quarterly.

Nerissa S. Balce is a cultural studies scholar. She is an Associate professor of Asian American studies at SUNY Stony Brook. Balce is the author of the book, Body Parts of Empire: Visual Abjection, Filipino Images and the American Archive (University of Michigan Press 2016 and Ateneo de Manila University Press 2017). Her current research focuses on visual culture, fiction, and the afterlives of empire and authoritarianism.

Dylan Rodríguez is a teacher, scholar, and collaborator who works with and within abolitionist and other radical communities and movements. Since 2001, he has maintained a day job as a Professor at the University of California, Riverside, where he also serves as Co-Director of the Center for Ideas and Society. His peers elected him President of the American Studies Association for 2020-2021, and in 2020 he was named to the inaugural class of Freedom Scholars. Dylan is the author of three books, including White Reconstruction: Domestic Warfare and the Logic of Racial Genocide (Fordham University Press, 2021) and Suspended Apocalypse: White Supremacy, Genocide, and the Filipino Condition (University of Minnesota Press, 2009).