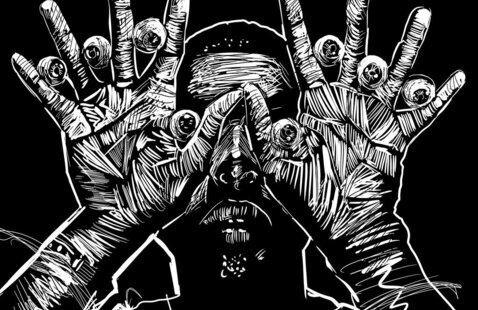 The conventional horror tropes of the return of the repressed and of the monster do not adhere to black life which has been characterized by ever present terror and the misnaming of the monster. Through this convocation of dynamic writers, theorists, and artists, the conversation will touch upon issues of craft as well as of how to live blackly, attuned to the unique yet common experience of what John Jennings has called “the Black gothic.”

Kiese Makeba Laymon is a Black southern writer from Jackson, Mississippi. Laymon is the author of Long Division and How to Slowly Kill Yourself and Others in America. Laymon’s bestselling memoir, Heavy: An American Memoir, won the 2019 Andrew Carnegie Medal for Excellence in Nonfiction, the 2018 Christopher Isherwood Prize for Autobiographical Prose, and was named one of the 50 Best Memoirs of the Past 50 Years by The New York Times. The audiobook, read by the author, was named the Audible 2018 Audiobook of the Year. Laymon is the recipient of 2020-2021 Radcliffe Fellowship at Harvard.

Dr. Lisa B. Thompson is professor of African and African Diaspora Studies at the University of Texas at Austin. She is author of Beyond The Black Lady: Sexuality and the New African American Middle Class, Single Black Female, and Underground, Monroe, and The Mamalogues: Three Plays. Thompson’s plays have been produced throughout the US and internationally. Her accolades include LA Weekly Theatre Award for Best Comedy nominee, Irma P. Hall Black Theatre Award Best Play winner, Austin Critics Circle David Mark Cohen New Play Award winner, and Broadway World Regional Awards Best Writing of an Original Work winner.

John Jennings is an author, graphic novelist, curator, Harvard Fellow, New York Times Bestseller, and 2018 Eisner Winner. A Professor of Media and Cultural Studies at the University of California at Riverside (UCR), Jennings is director of Abrams ComicArts imprint Megascope, Jennings is co-editor of the 2016 Eisner Award-winning collection The Blacker the Ink: Constructions of Black Identity in Comics and Sequential Art and co-founder/organizer of The Schomburg Center’s Black Comic Book Festival in Harlem. He is co-founder and organizer of the MLK NorCal’s Black Comix Arts Festival in San Francisco and also SOL-CON: The Brown and Black Comix Expo.

Dr. Therí A. Pickens is Professor of English at Bates College, specializing in African American, Arab American and disability literatures and theories. Her monograph, Black Madness :: Mad Blackness, explores the connection between Blackness and madness. Her first book New Body Politics: Narrating Arab and Black Identity in the Contemporary United States. She guest edited the 50th anniversary issue of African American Review and the College Language Association Journal special issue on Blackness and Disability. Her poetry has appeared in Squaw Valley Journal, Black Renaissance/Renaissance Noire, and Disability Studies Quarterly. Her drama has been performed at the NJ State Theater.

dr. andré carrington is Associate Professor of English at UC Riverside. His book, Speculative Blackness: The Future of Race in Science Fiction analyzes the role of blackness in science fiction and fantasy works across popular media. He has published in Present Tense, Sounding Out!, African & Black Diaspora, the Blackwell Companion to the Harlem Renaissance, The Blacker the Ink, and Black Gay Genius: Answering Joseph Beam’s Call. He is a past fellow of the Penn Humanities Forum (now the Wolf Humanities Center) and the Hutchins Center at Harvard, and is the recipient of a New York Council for the Humanities grant.

Dr. Courtney R. Baker is an Associate Professor in the department of English at University of California, Riverside. She was a Mellon Postdoctoral Fellow at the James Weldon Johnson Institute at Emory University. She co-founded and served as the inaugural chair of the Black Studies program at Occidental College where she was also an Associate Professor of American Studies. She is author of HUMANE INSIGHT: Looking at Images of African-American Suffering and Death. She has written academic and popular essays on African-American film, the history of the image in African-American activism, and the ethics of narratives about death.