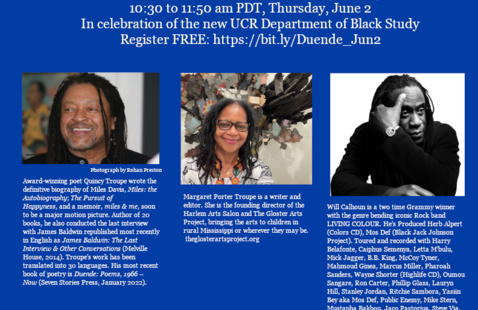 In celebration of the new UCR Department of Black Study

Award-winning poet Quincy Troupe wrote the definitive biography of Miles Davis, Miles: the Autobiography; The Pursuit of Happyness, and a memoir, miles & me, soon to be a major motion picture. Author of 20 books, he also conducted the last interview with James Baldwin republished most recently in English as James Baldwin: The Last Interview & Other Conversations (Melville House, 2014). Troupe’s work has been translated into 30 languages. His most recent book of poetry is Duende: Poems, 1966 – Now (Seven Stories Press, January 2022).

Margaret Porter Troupe is a writer and editor. She is the founding director of the Harlem Arts Salon and The Gloster Arts Project, bringing the arts to children in rural Mississippi or wherever they may be. theglosterartsproject.org

Tyehimba Jess, a Cave Canem and NYU Alumni, is the author of two books of poetry

Leadbelly and Olio. Olio won the 2017 Pulitzer Prize, the Anisfield-Wolf Book Award, The Midland Society Author’s Award in Poetry, and received an Outstanding Contribution to Publishing Citation from the Black Caucus of the American Library Association. It was also nominated for the National Book Critics Circle Award, the PEN Jean Stein Book Award, and the Kingsley Tufts Poetry Award. Leadbelly was a winner of the 2004 National Poetry Series. The Library Journal and Black Issues Book Review both named it one of the “Best Poetry Books of 2005.”

Keith Gilyard has written and lectured extensively on language and literacy for over 30 years. Two-time recipient of an American Book Award, Keith Gilyard has passionately embraced African American expressive culture over the course of his career as a poet, scholar, and educator.

Gilyard has authored, edited, or co-edited twenty books, including the education memoir Voices of the Self: A Study of Language Competence (1991), the poetry collections American Forty (1993) and Poemographies (2001), as well as the novella The Next Great Old-School Conspiracy (2016).