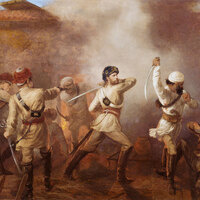 This talk will explore the effects of the Indian Rebellion on British military forces both in the immediacy of battle and its aftermath. Military psychiatry was not born in the trenches of the First World War, nor was it a journey from psychological ignorance in the past to enlightenment today. In studying medical and contemporary ideas of mental breakdown on their own terms we can gain a better understanding of not only military medicine, but ideas of empire and idealized masculinity.