Hot off the Presses: In the Forest of the Blind: "The Eurasian Journey of Faxian's Record of Buddhist Kingdoms" with Matthew King 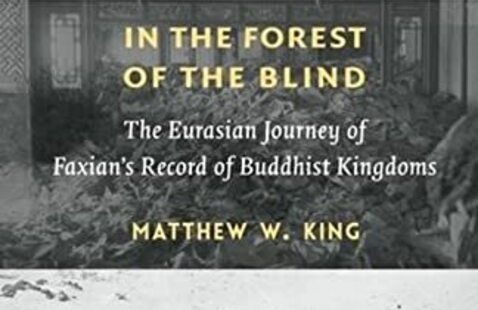 Hot off the Presses book talk with Matthew King (Religious Studies, UCR) on his new book:

"In the Forest of the Blind: The Eurasian Journey of Faxian's Record of Buddhist Kingdoms"

The Record of Buddhist Kingdoms is a classic travelogue that records the Chinese monk Faxian’s journey in the early fifth century CE to Buddhist sites in Central and South Asia in search of sacred texts. In the nineteenth century, it traveled west to France, becoming in translation the first scholarly book about “Buddhist Asia,” a recent invention of Europe. This text fascinated European academic Orientalists and was avidly studied by Hegel, Schopenhauer, and Nietzsche. The book went on to make a return journey east: it was reintroduced to Inner Asia in an 1850s translation into Mongolian, after which it was rendered into Tibetan in 1917. Amid decades of upheaval, the text was read and reinterpreted by Siberian, Mongolian, and Tibetan scholars and Buddhist monks.

Matthew W. King offers a groundbreaking account of the transnational literary, social, and political history of the circulation, translation, and interpretation of Faxian’s Record. He reads its many journeys at multiple levels, contrasting the textual and interpretative traditions of the European academy and the Inner Asian monastery. King shows how the text provided Inner Asian readers with new historical resources to make sense of their histories as well as their own times, in the process developing an Asian historiography independently of Western influence. Reconstructing this circulatory history and featuring annotated translations, In the Forest of the Blind models decolonizing methods and approaches for Buddhist studies and Asian humanities.

Matthew W. King is associate professor in transnational Buddhism in the Department of Religious Studies at the University of California, Riverside. He is the author of Ocean of Milk, Ocean of Blood: A Mongolian Monk in the Ruins of the Qing Empire (Columbia, 2019), which won the 2020 Award for Excellence in the Study of Religion: Textual Studies from the American Academy of Religion.

Hot off the Presses

Can we tag Religious Studies in Departments?