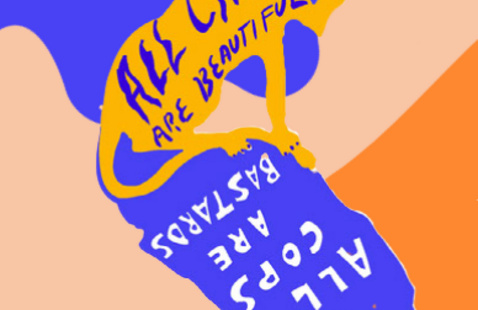 Join us for a far-ranging conversation with Jessica Black of the Black Organizing Project and Prof. Kimberly King (Laney Community College) of Black Minds Matter (Peralta Community College District) and the Laney Chapter of the Poor People's Campaign to discuss Oakland's long and eventually successful struggle to get police out of public schools and community colleges. The conversation will be facilitated by cultural historian, political theorist, and Cops Off Campus member Prof. Erin Gray (Assistant Professor, English, UC Davis) and will include Prof. Dylan Rodríguez, Co-Director of the Center for Ideas and Society and a founding Cops Off Campus collaborator/organizer.

Jessica Black is a Minnesota native with a passion for social justice and cultural interpretation. A mother of two, Jessica came to California in 2013 in order to reconnect with family.

For 10 years, as the Education Systems Navigator at the Cultural Wellness Center in Minnesota, Jessica worked to further enhance her skills of strategic planning, collective communication, shared authority and motivational speaking. Jessica has worked to dismantle unequal systematic approaches in housing, employment, education and criminal justice institutions for many years.

Jessica embraces and is guided by the elders within her community. These relationships aid her in recruiting and organizing Black parents, to encourage their involvement in schools, and influencing policy, procedures, and paradigm shifts. Ultimately, Jessica’s passion to help Black people recognize the power and potential they possess led her to BOP. Through BOP Jessica hopes to continue her journey of achieving equitable access for Black people.

Kimberly King earned her BA in Psychology from Yale University and her MA and PhD in Psychology from the University of California, Los Angeles. She is a community organizer and committed advocate for social justice leading numerous workshops and teach-ins both on and off campus. Currently, she is the Chairperson of the Peralta Federation of Teachers Diversity Committee, as well as the Faculty Co-Coordinator of the Umoja-Ubaka Project. She is a Professor at Laney Community College in Psychology and Ethnic Studies, a founding member of Black Minds Matter (Peralta), and a member of the Laney Chapter of the Poor People’s Campaign.

Erin Gray is a post-disciplinary cultural historian and political theorist focusing on the relationship between politics, aesthetics, and critical theory. Her research interests include political violence and left counter-histories of genocide; visual and performance studies; aesthetics and experimental poetics; gender studies and feminist epistemology; critical race studies; the black radical tradition and critiques of racial capitalism; historiography and history from below; affect, sentiment, sensation, and biopolitics.

Erin’s research is presently focused on gendered racial formations within the photographic history of global white supremacy. Her current book project, The Moving Image of Lynching: Law-Founding Violence and Liberal Terror in the United States, engages the circulation of lynching across such media forms as the postcard, pamphlet, photography exhibition, magazine spread, newsreel, sound installation, and live and recorded reenactment to theorize an altered history of white supremacist violence in the U.S. Focusing on the co-emergence of legal lynching and racial liberalism, the manuscript theorizes the image of lynching as a dialectical object that illuminates the constitutive relationship of extra-legal terror to racial capitalism and U.S empire.

Prior to her appointment at UC Davis, Erin taught in the department of Media, Culture, and Communication at New York University as a Provost postdoctoral fellow. From 2017-2018, Erin was a University of California President’s postdoctoral fellow in African American Studies at UC Irvine. She has twice been awarded fellowships from the Social Science and Humanities Research Council of Canada.

Dylan Rodríguez is an abolitionist teacher, scholar, and collaborator. He was an inaugural Freedom Scholar awardee in 2020 and was elected by his peers to serve as the 2020-2021 President of the American Studies Association. He has worked as a Professor at the University of California, Riverside since 2001 and became Co-Director of the Center for Ideas and Society in 2021. He served two elected terms as Chair of the UCR Division of the Academic Senate (2016-2020) and chaired the Department of Ethnic Studies between 2009-2016. Dylan is the author of three books, most recently White Reconstruction: Domestic Warfare and the Logic of Racial Genocide (Fordham University Press, 2021).