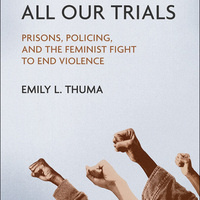 All Our Trials: Prisons, Policing, and the Feminist Fight to End Violence

Please join the Department of Ethnic Studies and the research working group, Critical Antiviolence Research & Action, for a distinguished guest talk by Prof. Emily Thuma, author of All Our Trials: Prisons, Policing, and the Feminist Fight to End Violence.

During the 1970s, grassroots women activists in and outside of prisons forged a radical politics against gender violence and incarceration. Emily L. Thuma traces the making of this anticarceral feminism at the intersections of struggles for racial and economic justice, prisoners’ and psychiatric patients’ rights, and gender and sexual liberation.

All Our Trials explores the organizing, ideas, and influence of those who placed criminalized and marginalized women at the heart of their antiviolence mobilizations. This activism confronted a "tough on crime" political agenda and clashed with the mainstream women’s movement’s strategy of resorting to the criminal legal system as a solution to sexual and domestic violence. Drawing on extensive archival research and first-person narratives, Thuma weaves together the stories of mass defense campaigns, prisoner uprisings, broad-based local coalitions, national gatherings, and radical print cultures that cut through prison walls. In the process, she illuminates a crucial chapter in an unfinished struggle––one that continues in today’s movements against mass incarceration and in support of transformative justice.

Emily L. Thuma is an assistant professor of American politics and public law at the University of Washington, Tacoma.