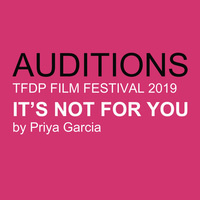 OPEN TO ALL UCR STUDENTS, REGARDLESS OF MAJOR

AUDITIONS for UCR THEATRE DEPARTMENT FILMS, WINTER 2019
IT'S NOT FOR YOU
An original short film written by Priya Garcia
A trio of college students learns that Cupid's arrow doesn't always connect with its intended target.

TWO FILMS WILL BE CAST
A different cast will be selected for each film.

YOU MUST BE AVAILABLE AND PRESENT DURING THE ENTIRE AUDITION TIME.

• Cast members must enroll in TFDP 170
• Bring a head shot with you to the audition.
• Wear simple, businesslike clothing; flat shoes; hair back and away from face.
• Sign Up on the callboard in the ARTS Building Stairwell, across from the Studio Theatre, ARTS 113

Questions should be directed to Alan Call, Technical Director, at alan.call@ucr.edu

Free and open to all UCR Students