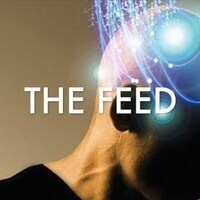 Please Join Us for UCR'S Inaugural Launch of the Open Book Series (OBS) with a Special Visit from M.T. Anderson, as the Author Looks Back at One of the Most Remarkable Works of Dystopian Fiction in the 21st Century: His Young Adult Novel "Feed," Published at the Dawn of Our New Millennium in 2002.

This Event is FREE & OPEN to all UCR Affiliates (Students, Staff & Faculty) on a First-Come, First Serve Basis. Since this event is part of UCR Residential Life's Welcome Week, incoming 1st years are especially encouraged to attend. {Information About the Book Talk and Driving/Parking Directions Can Be Found Below.}

PLEASE FEEL FREE TO SHARE THIS EVENT WITH OTHERS!

While Suzanne Collins' "Hunger Games" is often regarded as homage to "Battle Royale" (one she vociferously denies), or Stephen King's "Running Man," the trilogy more clearly rests its lineage as Young Adult version of "1984," where power is clearly marked out by geographic borders and colonies with a totalitarian state of the Capital run by a dictator called President Snow. Collins' understanding of power is quite similar to the understanding of power as conceptualized by George Orwell's Big Brother in "1984." Clear hierarchies of state oppression rend those down below with brute force and unflinching violence--with the added treat of a Roman coliseum envisioned by Shirley Jackson's "The Lottery," where round-the-clock binge-watching can commence for viewers from the 12 colonies oppressed by Snow's Capital.

But what happens, though, if Big Brother, lives inside of you, rather than over you? With "Feed"--our modern-day corollary of Aldous Huxley's "Brave New World"--M.T. Anderson's diabolical and darkly satiric send-up of a dystopian future, the author imagines power as something far more diffuse, wobbly and discomfiting. Published precisely a year prior to the political philosopher Sheldon Wolin's conception of "Inverted Totalitarianism," Anderson's novel prophetically broadcasts how our addiction to pleasure and distraction make our closet-monster grow ever rapaciously larger, pixel by pixel, download by download, text to text. In a future not too far off, Anderson envisions the internet bio-engineered inside children's brains which races through their consciousness. In doing so, these new implants create Augmented Reality (AR) layers where Pepsi bottles pour endless caffeine from cloudless skies into our eyes and where our friends appear as holograms to sell us new cars while we're sitting inside them.

We will discuss the towering achievement of Anderson's novel, "Feed," how it features into the author's most current work, and what lessons it might provide us in a world that--as David Foster Wallace protests--wants to entertain us to death.

ABOUT THE AUTHOR {FROM WIKIPEDIA}:

MATTHEW TOBIN ANDERSON, known as M.T. ANDERSON (born November 4, 1968), is an American writer of children's books that range from picture books to young adult novels. He won the National Book Award for Young People's Literature in 2006 for "The Pox Party," the first of two "Octavian Nothing" books, which are historical novels set in Revolution-era Boston. Anderson is known for using wit and sarcasm in his stories, as well as advocating that young adults are capable of mature comprehension.

UPBRINGING TO ADULTHOOD: M.T. Anderson was born in Cambridge, Massachusetts. His father, Will Anderson, was an engineer, and his mother Juliana Anderson, was an Episcopal priest. He attended St. Mark's School, Harvard College, the University of Cambridge (England), and Syracuse University. Anderson worked at Candlewick Press before his first novel "Thirsty" (1997) was accepted for publication there. He has also worked as a disc jockey for WCUW radio; as an instructor at Vermont College of Fine Arts, where he now serves on the Board; and as a music critic for The Improper Bostonian. He currently lives in Cambridge (Mass.) and is on the Board of the National Children's Book and Literacy Alliance, a national non-profit organization that advocates for literacy, literature, and libraries.

DIRECTIONS AND PARKING DESCRIPTIONS DOWN BELOW

For directions from the 91, 10 and 60 highways in the San Diego, Los Angeles, Ontario, Orange County and Palm Spring areas, please visit our website:

The two best ways to get to UC RIVERSIDE is to take either the Martin Luther King or University Avenue exits off Highway 60. If you want a helping hand, take the University Avenue exit: 1) take the exit ramp down; 2) turn left at the first stoplight and 3) make the very next right onto West Campus Drive. Just 100 feet up you will see an info kiosk to pay for parking or receive maps and parking directions if needs arise.

The University Lecture Hall 1000 is directly behind the HUB, which is basically the student commons and will be hard to miss once on campus due to the fact that it looks like the Titanic built by IKEA. UNLH sits right beside college drive route somewhat near to the Health Clinic and the Recreation Gyms.