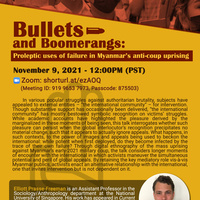 In various popular struggles against authoritarian brutality, subjects have appealed to external entities – “the international community” – for intervention. Though substantive support has occasionally been delivered, “the international community” has mostly bestowed symbolic recognition on victims’ struggles. While academic accounts have highlighted the pleasure derived by the marginalized in these moments of being seen, this talk interrogates whether such pleasure can persist when the global interlocutor’s recognition precipitates no material change, such that it appears to actually ignore appeals. What happens, in such contexts, to the power of images and appeals being used to beckon the international: while potent when first deployed, do they become infected by the trace of their own failure? Through digital ethnography of the mass uprising against Myanmar’s early-2021 military coup, the talk considers longer moments of encounter with the international in which activists maneuver the simultaneous potential and peril of global appeals. By retaining the key mediatory role vis-à-vis Myanmar publics, activists enact an alternative relationship with the international, one that invites intervention but is not dependent on it. Elliott Prasse-Freeman is an Assistant Professor in the Sociology/Anthropology department at the National University of Singapore. His work has appeared in Current Anthropology (forthcoming), Journal of Peasant Studies, Anthropological Theory, and Journal of Asian Studies, amongst others.