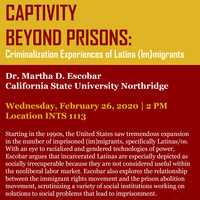 Starting in the 1990s, the United States saw tremendous expansion in the number of imprisoned (im)migrants, specifically Latinas/os. With an eye to racialized and gendered technologies of power, Escobar argues that incarcerated Latinas are especially depicted as socially irrecuperable because they are not considered useful within the neoliberal labor market. Escobar also explores the relationship between the immigrant rights movement and the prisona bolition movement, scrutinizing a variety of social institutions working on solutions to social problems that lead to imprisonment.