Co-Productions: Literature, Media and Diaspora in the Japanese Transpacific 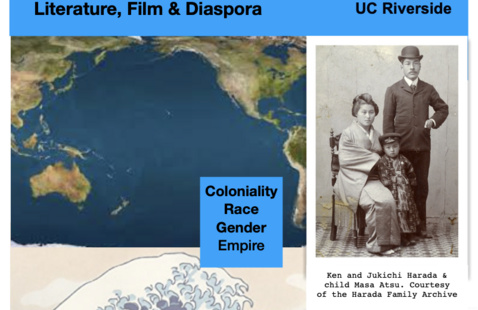 This international symposium brings together scholars from across the UC system, US, Canada and Japan for an interdisciplinary exchange that advances our knowledge of transpacific history and politics. Our keyword of “co-production” within this transpacific context emphasizes our analysis of hybridized assemblages that constitute the imperial, colonial and postcolonial collaborations and conflicts from the 19th to the 21 century. By emphasizing co-production across the diasporic and migration of subjects moving between Japan and the US, this symposium underscores the gendered-racialized dynamics of exclusion and immobilization that emerge when confronted with the local histories of Japanese in California.

This symposium continues a series of Transpacific Workshop (TPW) that have convened at UCLA (from 2015-2019) under the leadership of Katsuya Hirano, Junko Yamazaki and Hirotaka Kasai of Tsuda College. Past TPWs have involved Japan Studies scholars from seven Japanese universities and UCR, UCLA, UCI, UCSD. The original aim of this working group was to create a space for interdisciplinary knowledge exchange and sustained dialogue among scholars concerned with the growing rightwing nationalism and racist xenophobia evident across Japan and the U.S.

Three special features of our program include a session about the history of the Harada House and a keynote dialogue about the state of the field of Japan Studies.

We plan to bring attention to the local histories of Japanese migration, legalized racial exclusion, and incarceration during World War II by devoting a session to the historic Harada House on Lemon Street in downtown Riverside. The Harada House is a National Historic Landmark and on the National Register of Historical Sites because it housed residents, a Japanese American family, who were the subjects of a landmark legal decision that allowed the family’s children to maintain possession of the property though their Japan-born parents could not. The Harada House helps narrate issues of post-WWII resettlement, as family members returned after incarceration and provided housing for other displaced people.

The Idol Nation and its Sexual Violence 『「アイドルの国」の性暴力 』(2021)

This courageous work by Chizuko Naito analyzes the logic of sexual violence of modern Japan. By focusing on the bodies of the “idol” and “comfort women,” Naito interrogates the commercialization of sex and the economies of the sexualized feminine body in wartime and contemporary Japan. In doing so, this work provides an unprecedented critique of the gender and nationalism in relation to its systemic production of sexual violence.

The State of Japan Studies and Empire: Co-figurations of Race, Coloniality & Knowledge Production

This keynote dialogue brings together scholars who have consistently challenged the epistemic assumptions of Area studies, Japan Studies, and Japanese-centrism. Rather than focusing on one individual scholar, we emphasize the co-production of knowledge across generations, disciplines, genders and ethnic positionalities of three influential scholars: Naoki Sakai (philosophy), Katsuya Hirano (history) and Youngran Ko (literature). Our keynote participants represent three genealogical and epistemic shifts in the emergence of transpacific studies.

Sponsored by the UCR Center for Ideas and Society; Asian Studies Program; Asian Pacific Student Programs; UC Office of the President MRPI Funding through a grant from the UC Humanities Research Institute; Northeast Asia Council of the Association for Asian Studies