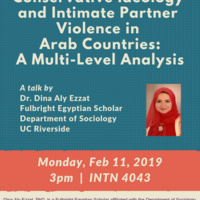 The Ethnic Studies Department presents:
Conservative Ideology and Intimate Partner Violence in Arab Countries: A Multi-Level Analysis
A talk by
Dr. Dina Aly Ezzat, Fulbright Egyptian Scholar, Department of Sociology, UC Riverside
Monday, Feb 11, 2019
3pm
INTN 4043
Abstract:
Previous studies have reported that violence against women, especially intimates is a global problem.  Incidence and prevalence rates differ, but there are indications that violence against women is especially wide spread and pernicious in Arab continues. The purpose of this research was to investigate whether social conservatism is a significant source of violence. Multilevel logistic regression models were fitted to data from wave 6 of the World Values Survey. It was found that social conservation promotes attitudes favorable to violence against women (n=9640, β=0.019, t=2.78). When the sample was stratified by gender, social conservatism was not significantly associated with anti-female spousal violence among men. Among women, however, social conservatism was a significant predictor of attitudes favorable to anti-female spousal violence (n=5039; β=0.036, t=3.58).These findings were explained within the framework of the consequences of gender oppression. It may well be that groups that have been oppressed for ages come to accept the status quo as immutable and a perfectly normal system to follow. Women in the Arab world are after all the carriers of culture. Mothers treat their daughters worse than their sons. A married woman that runs away from her abusive husband is forced by her family of orientation to return as failure to do so would generate shame and loss of honor. Perhaps one glaring hope for the Arab world is that among women, the higher the level of education, the less support for anti-female spousal violence.  It may well be that in the long run education could become the great equalizer.
Bio:
Dina Aly Ezzat, PhD, is a Fulbright Egyptian Scholar affiliated with the Department of Sociology at the University of California Riverside. She is a full lecturer in the Department of Sociology at Assiut University, Egypt. Her areas of research adopt a multi-disciplinary approach that encompasses Religion and Violence, Gender and Middle Eastern Societies, Demography, especially international migration, and Environment and Society.