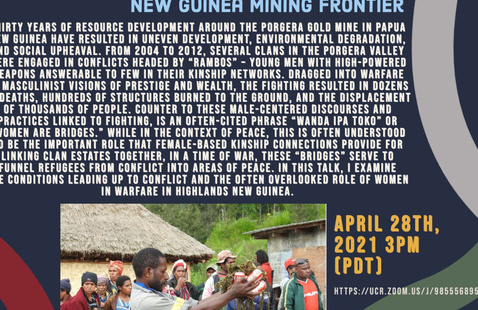 Dr. Jacka is an environmental anthropologist, Associate Professor from the Department of Anthropology at the University of Colorado Boulder, who will be presenting on research on Papua New Guinea on Wednesday (April 28 2021) @3-4pm (PST).

Abstract: Thirty years of resource development around the Porgera Gold Mine in Papua New Guinea have resulted in uneven development, environmental degradation, and social upheaval. From 2004 to 2012, several clans in the Porgera valley were engaged in conflicts headed by “Rambos” – young men with high-powered weapons answerable to few in their kinship networks. Dragged into warfare by masculinist visions of prestige and wealth, the fighting resulted in dozens of deaths, hundreds of structures burned to the ground, and the displacement of thousands of people. Counter to these male-centered discourses and practices linked to fighting, is an often-cited phrase “wanda ipa toko” or “women are bridges.” While in the context of peace, this is often understood to be the important role that female-based kinship connections provide for linking clan estates together, in a time of war, these “bridges” serve to funnel refugees from conflict into areas of peace. In this talk, I examine the conditions leading up to conflict and the often overlooked role of women in warfare in highlands New Guinea.