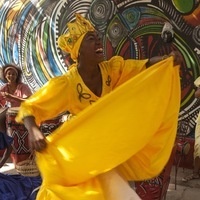 ENCUENTROS/ENCOUNTERS CONFERENCE. Cuba: An Island of Culture, a World of Music

CONFERENCE: Cuba: An Island of Culture, a World of Music
A roster of leading scholars and performers of Cuban music will present their latest research on various aspects of Cuban music, past and present

Place, Text, and Music in the Repertoire of Gerardo Alfonso
Robin Moore, University of Texas, Austin

The Sociedad Cultural Nuestro Tiempo as Predecessor of the Revolutionary Cultural Projects of Post-1959 Cuba
Marysol Quevedo, University of Miami

Videotaped performance of the Misa de Difuntos of Esteban Salas (1725-1803), performed by the UCR Choral Society under the baton of Edward Bruner, with Johnathan Keplinger, continuo.

Walter Aaron Clark, CILAM director and organizer of this year's Encuentro, earned a Ph.D. in musicology from UCLA, where he wrote his dissertation under the direction of the late Robert M. Stevenson. He is the author of books on Spanish composers Isaac Albéniz, Enrique Granados, and Federico Moreno Torroba, all published by Oxford University Press. His book on the Romero family of guitarists just appeared from University of Illinois Press. He is also the editor or co-editor of several other books on Spanish and Latin American music.  Founding editor of the Oxford series Currents in Latin American and Iberian Music (2005-2016), he is now editor-in-chief of the UC refereed online journal Diagonal: An Ibero-American Music Review. In 2016, King Felipe VI of Spain awarded him the title Knight Commander of the Order of Isabel the Catholic.

Encuentro Cubano:The fifteenth in a series of annual Encuentros/Encounters at UCR, this annual event focuses on the music of Cuba with an evening performance by the Cuban band Mezcla on April 25. The conference on April 26 features presentations by leading scholars and performers from around the United States as well as Cuba.

Encuentros/Encounters 2019 is made possible by generous financial support from the UC Riverside Office of the Chancellor; the College of Humanities, Arts, and Social Sciences; and the Department of Music.

Free and open to the public