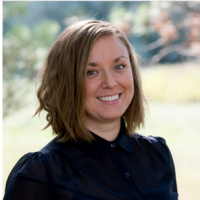 Variation in cognition can influence how individuals respond to and communicate about their environment, which may scale to shape how a collective solves a cognitive task. However, few empirical examples of variation in collective cognition emerges from variation in individual cognition exist. Here, I show that interactions among individuals that differ in the performance of a cognitive task drives collective foraging behavior in honey bee colonies by utilizing a naturally variable and heritable learning behavior called latent inhibition (LI). I artificially selected two distinct phenotypes: high LI bees that are better at ignoring previously unrewarding familiar stimuli, and low LI bees that can learn previously unrewarding and novel stimuli equally well. I then provided colonies composed of these distinct phenotypes with a choice between a familiar feeder or a novel feeder. Colonies of high LI individuals preferred to visit familiar food locations, while low LI colonies visited novel and familiar food locations equally. However, in colonies of mixed learning phenotypes, the low LI bees showed a preference to visiting familiar feeders, which contrasts with their behavior when in a uniform low LI group. I show that the shift in feeder preference of low LI bees is driven by foragers of the high LI phenotype dancing more intensely and attracting more followers. I also present potential physiological and transcriptomic mechanisms that may be mediating individual variation. These results reveal that cognitive abilities of individuals and their interactions drive emergent collective behavioral outcomes in social insects.