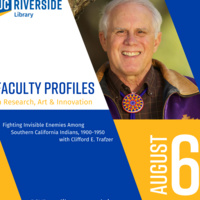 Native Americans long resisted Western medicine—but had less power to resist the threat posed by Western diseases. And so, as the Office of Indian Affairs reluctantly entered the business of health and medicine, Native peoples reluctantly began to allow Western medicine into their communities. Fighting Invisible Enemies traces this transition among inhabitants of the Mission Indian Agency of Southern California from the late nineteenth century through the mid-twentieth century.

What historian Clifford E. Trafzer describes is not so much a transition from one practice to another, but a gradual incorporation of Western medicine into Indian medical practices. Melding indigenous and medical history specific to Southern California, his book combines statistical information and documents from the federal government with the oral narratives of several tribes. Many of these oral histories—detailing traditional beliefs about disease causation, medical practices, and treatment—are unique to this work, the product of the author’s close and trusted relationships with tribal elders.

Trafzer examines the years of interaction that transpired before Native people allowed elements of Western medicine and health care into their lives, homes, and communities. Among the factors he cites as impelling the change were settler-borne diseases, the negative effects of federal Indian policies, and the sincere desire of both Indians and agency doctors and nurses to combat the spread of disease. Here we see how, unlike many encounters between Indians and non-Indians in Southern California, this cooperative effort proved positive and constructive, resulting in fewer deaths from infectious diseases, especially tuberculosis.

The first study of its kind, Trafzer’s work fills gaps in Native American, medical, and Southern California history. It informs our understanding of the working relationship between indigenous and Western medical traditions and practices as it continues to develop today.

Clifford E. Trafzer, Distinguished Professor of History at the University of California, Riverside, is the author or editor of numerous books, including Death Stalks the Yakama: Epidemiological Transitions and Mortality on the Yakama Indian Reservation, 1888–1964 and A Chemehuevi Song: The Resilience of a Southern Paiute Tribe. He is a recipient of the Lifetime Achievement Award in American Indian History from the Western History Association.

Please register and you will receive the link to join by email.