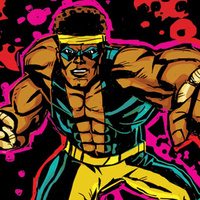 
Twenty years ago, Marlon Riggs produced an essential documentary critique of the images of African Americans in US television in his award-winning Color Adjustment. Now comes a documentary on representations of Black masculinity in comic books; a popular culture genre which existed before television and whose reach extends into other areas of cultural production such as movies and animated TV series. White Scripts and Black Supermen: Black Masculinities in Comic Books analyzes the subject for the first time and looks at it over a 40 year period.


In a serious, lively and humorous manner, the film examines the degree to which some of the first Black superheroes generally adhered to and were burdened by stereotypes about Black men. However we also witness how some images shifted – oftentimes clumsily - to reflect the changing times. In fact, the documentary was formerly entitled Shaft or Sidney Poitier: Black Masculinity in Comic Books to signify two types of characters, one with hyper-masculine urban swagger (Shaft) and one with remarkably “dignified” behavior (Sidney Poitier). Ultimately, it became clear that there was much more "Shaft" than "Sidney Poitier" in these early Black superheroes.


This screening is in conjunction with the exhibition UNCAGED: HERO FOR HIGHER.