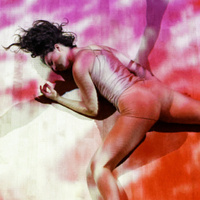 • Frantic Beauty is SOLD OUT •

Please note: Partial nudity, bright lights, and haze are used at the beginning of the performance.

Lit solely by 8 video projectors, the performers throw their bodies through the air; collide and they fall while also giving way to still moments. Through the ever-evolving video projections, the stage oscillates between rhythmic, textured landscapes and fractured layers of light sweeping through the space and uncovering the performers. The score is conceived in episodic, mini-narratives which contrast still and peaceful movements with more agitated chapters. The coexistence of these two states in the score eventually comes together, as the tension of the two extremes seeks its own level and sense of balance. Frantic Beauty is the third chapter of LEIMAY’s BECOMING SERIES.

Ximena Garnica and Shige Moriya with the LEIMAY Ensemble are in residence in the UCR Department of Dance, January through March 2019.

There will be multiple opportunities to engage through embodied dialogue with the artists while they are in residency. Click here for a full listing of activities open to the UCR campus.

Ximena Garnica and Shige Moriya are a Colombian and Japanese multidisciplinary artist duo. Their collaborative works manifest in live installations, performances, sculptures as well as publications, research, and community projects. Shige and Ximena are the co-founders and artistic directors of the arts organization LEIMAY and the performance group the LEIMAY Ensemble. The word LEIMAY is a Japanese term symbolizing the changing moment between darkness and the light of dawn, or the transition from one era to the other. Ximena and Shige work out of their home studio CAVE located in Williamsburg, Brooklyn. Their work has been presented at a number of art spaces including BAM, The New Museum, The Brooklyn Museum, The Watermill Center, HERE, Japan Society, and The Asian Museum of San Francisco. This year they have been nominated for the USA Artists Fellowship and the Herb Alpert Award. They have been part of the Bessie Schonberg Individual Choreographers Residency at the Yard, the Watermill Center Residency Programs, and the HERE Artist in Residency Program. Ximena was a recipient of the Van Lier Fellowship for extraordinary stage directors, and she is currently a Distinguished Visiting Professor at the University of California, Riverside. Her article ‘LEIMAY, CAVE, and the New York Butoh Festival’ has recently been published in The Routledge Companion to Butoh Performance. In 2012 Ximena and Shige founded the LEIMAY Ensemble, a group of five international dancers and performers who hold a regular practice at their studio in Brooklyn where they engage in the creation of new work as well as on teaching, training, research, and distillation of years of direct transmission of embodied knowledge by Japanese Butoh pioneers, Noguchi Taiso practitioners, and Experimental Theater innovators. Through the work with the LEIMAY Ensemble, Ximena and Shige have developed LUDUS, a practice that explores methods to physically condition the body of the performers and cultivates sensitivity to the “in-between space.” Current ensemble members included: Masanori Asahara, Krystel Copper, Andrea Jones, Derek Dimartini and Mario Galeano.

Events are subject to change without notice.
No Reserve Seating: Seating in some venues is limited, so arrive early for best seats.
Events begin promptly at the announced curtain time.
Latecomers will be seated at an appropriate pause in the program as designated by the management.
Please order carefully. No exchanges or refunds will be made, except in the event a performance is canceled.
Regardless of age, all patrons must have a ticket. Infants on laps are not permitted.