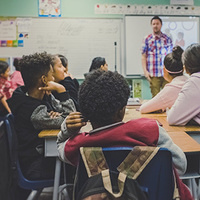 As Ethnic Studies has a growing presence in K-12 schools, there are dreams of great possibility and worry that it may not live its promise. Serving as an anchor and reminder of the essence of Ethnic Studies, we invite teachers, school administrators, community advocates, and teacher educators to this event that is co-sponsored by UCR's Graduate School of Education, Ethnic Studies Department, Chicano/Latino Student Programs, Asian Pacific Student Programs, and the Institute for Teachers of Color Committed to Racial Justice (ITOC). Designed as a roundtable, we will bring together various Ethnic Studies professors to operationalize what Ethnic Studies means to them, and to discuss their fears and hopes for K-12 Ethnic Studies.

Tracy Lachica Buenavista (she/her(s)/isuna) is Professor of Asian American Studies, a core faculty member of the Doctoral Program in Educational Leadership, and co-principal investigator and faculty mentor for the CSUN DREAM Center, among the earliest undocumented student resource projects established in the California State University system. In her research she utilizes critical race theory to examine how race, (im)migration, and carcerality shape the educational access, retention, and experiences of BIPOC students and educators. She has published various articles and book chapters on these issues, and co-edited four books including Education at War!, “White” Washing American Education, and the forthcoming First-Generation Faculty of Color.

Jennifer R. Nájera is Associate Professor and Chair of Ethnic Studies at UC Riverside.  Dr. Nájera’s research interests lie at the intersections of race, immigration, and education, and she is committed to producing work that is community-accountable.  She is the author of The Borderlands of Race:  Mexican Segregation in a South Texas Town (University of Texas Press, 2015) and is currently working on a manuscript entitled, Undocumented Education: Intersections of Activism and Education Among Undocumented Students.

Gerald Clarke is an enrolled member of the Cahuilla Band of Indians and lives on the Cahuilla Indian Reservation. When not creating artwork or serving as Assistant Professor of Ethnic Studies at the University of California, Riverside, Gerald oversees the Clarke family cattle ranch and remains heavily involved in Cahuilla culture. He is a frequent lecturer, speaking about Native art, culture and issues. He serves on the Cahuilla Tribal Council and works on issues affecting the tribe. When not working, Clarke participates in Bird Singing, a traditional form of singing that tells the cosmology of the Cahuilla people.

Kenya Davis-Hayes is a professor of US History at California Baptist University teaching a variety of topics from the Colonial Period through the Cold War.  Her academic research has taken her around the world and she is lectures frequently across the nation on various subjects including the history of African American civil rights, women’s suffrage and other minority issues particularly on behalf of the Gilder Lehrman Institute on American History and the Los Angeles Museum of Tolerance.  From 2007-2014 she served as an Arnold Schwarzenegger appointee to California Humanities the state branch of the National Endowment for the Humanities.  Kenya Davis-Hayes has published in a variety of academic texts and also covers the arts and humanities across Southern California on behalf of her local public television station’s publications, ArtBound and Lost LA.  She is currently working on book highlighting the history of black women on television during the Civil Rights era.

Anthony J. Ratcliff is an Associate Professor in the Department of Pan-African Studies at California State University, Los Angeles. He earned a Ph.D. in African American Studies from the University of Massachusetts, Amherst in 2009. His dissertation analyzed the Pan-African politics of cultural struggle, with particular attention paid to the international dimensions of the Black Arts Movement. As a critical Hip Hop educator and radical historian, Anthony's scholar-activist research and teaching interests include revolutionary Black arts and politics; Black anti-authoritarian and autonomous movements; Black feminist theory and praxis; cooperatives and mutual aid projects, decolonial activism and organizing; the impact of capitalism and mass incarceration on Hip Hop cultural production, and the abolition of policing and prisons. When not in the classroom or mentoring students, Anthony is the Chapter President of the California Faculty Association-Los Angeles (CFA-LA), as well as an organizer with the CSU Abolition Network, the IWW Educational Workers IU 620, and the Leimert Park Mutual Aid Organizing Committee.

Jonathan D. Gomez is an Assistant Professor and Undergraduate Studies Advisor in Chicana/o Studies at San José State University and poet. He earned his doctorate from the University of California, Santa Barbara in the Department of Sociology with an Emphasis in Black Studies. Born and raised in the barrio of City Terrace in East Los Angeles, he credits his first teachers—mother, grandparents, and tías—for nurturing his passion for study and community engagement. At every level of education, he received mentorship, training, and resources that enabled him to become a serious and committed scholar. Gomez's book project, El Barrio Lindo: Chicanx and Latinx Social Space in Forgotten Places of Postindustrial Los Angeles examines the ways in which people who have been dispossessed and displaced envision and enact cultural practices to take possession of concrete spaces across the city as strategies for refusing the unlivable destinies to which they have been relegated.

Rita Kohli is an Associate Professor and Equity Advisor in the Graduate School of Education at UC Riverside. She also serves as the coordinator of the Teacher Education Program Ethnic Studies Pathway, and is co-director of the Institute for Teachers of Color Committed to Racial Justice.

Arturo Nevárez (he/him) is a PhD Candidate in the Graduate School of Education at the University of California Riverside and a former middle and high school English teacher. An emerging scholar of race and racism in K-12 educational contexts, his research focuses on the racial literacy development (RLD) of Latinx students and teachers in K-12 Ethnic Studies classrooms.