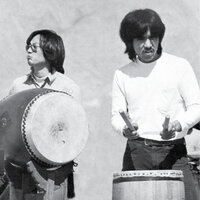 Hot off the Presses: Deborah Wong

A conversation about Louder and Faster: Pain, Joy, and the Body Politic in Asian American Taiko (2019, University of California Press),

in conversation with Sean Miura.

Louder and Faster: Pain, Joy, and the Body Politic in Asian American Taiko is an open access book available on the UC Press website, through JSTOR, or as a free Kindle book.

Louder and Faster is a study of Asian American taiko, the thundering, athletic drumming tradition that originated in Japan. Immersed in the taiko scene for twenty years, Deborah Wong has witnessed cultural and demographic changes and the exponential growth and expansion of taiko, particularly in Southern California. Through her participatory ethnographic work, she reveals a complicated story embedded in memories of Japanese American incarceration and legacies of imperialism, Asian American identity and politics, a desire to be seen and heard, and the intersection of culture and global capitalism. Exploring the materialities of the drums, costumes, and bodies that make sound, analyzing the relationship of these to capitalist multiculturalism, and investigating the gender politics of taiko, Louder and Faster considers both the promises and pitfalls of music and performance as an antiracist practice. The result is a vivid glimpse of an Asian American presence that is both loud and fragile.

Deborah Wong is an ethnomusicologist and Professor of Music at the University of California, Riverside. She specializes in the musics of Asian America and Thailand and has written three books: Louder and Faster: Pain, Joy, and the Body Politic in Asian American Taiko, Speak It Louder: Asian Americans Making Music, and Sounding the Center: History and Aesthetics in Thai Buddhist Ritual. She is a past President of the Society for Ethnomusicology. She is a series editor for Wesleyan University Press’s Music/Culture series and serves on the editorial boards for the journals Ethnomusicology, Women and Music, Asian Music, and the Yearbook for Traditional Music, and she is a curator for the new Asian Pacific America Series for Smithsonian Folkways. Very active in public sector work at the national, state, and local levels, she recently completed a term as the Chair of the Advisory Council for the Smithsonian Institution’s Center for Folklife and Cultural Heritage.

Sean Miura is a Los Angeles-based writer and arts organizer. He is the producer/lead curator for Tuesday Night Cafe, the oldest Asian American public art series in the nation. His writing has appeared in publications and outlets like the Harvard Asian American Policy Review, Nerds of Color, and Reappropriate. He has studied shamisen as part of the Sawai Koto Academy and the Mitsuru Sasaki Sangenkai and performed/recorded as a member of Nobuko Miyamoto’s Mottainai Band. He currently works at BuzzFeed in creative strategy.

Hot off the Presses, UCRideas