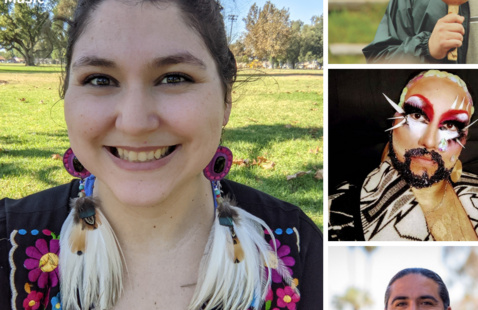 Talking circles are a practice used by some Indigenous communities across America to discuss issues, exchange ideas, and heal trauma. Our presentation reflects on our copublished piece, Research A’chaqwen E’hichene in a Good Way, modeled after a talking circle, and is a materialized envisioning of decolonizing writing and publishing. We define decolonization as a spectrum ranging from actionable matters such as giving the land/water/air/fire rights back to Indigenous peoples and the sovereignty of Tribal Nations, to more intimate, powerful movements of hope, resilience, and love (Tuhiwai Smith 2012, Million 2009, Risling Baldy 2018). In our talking circle together we discussed cross cultural perspectives of Indigeneity and the contentions between Danza (an Indigenous music, dance, and spiritual practice from Mexico) and powwow (a North American intertribal music and dance practice) participants in the Southwest. Considering the COVID­-19 pandemic restructuring the way we research, we share the benefits of talking circles in both virtual and in-person settings. By recentering our roles away from researchers and knowledge bearers, we facilitated a dialogic process that builds trust, relationships, and good energy. In sharing how we bridge Indigenous methodologies, peoples, and voices, we demonstrate the weight of academic responsibilities to fellow communities, our ancestors, and future generations. Decolonizing one’s livelihood, community, and beyond is an ongoing negotiation of how to do things in a good way, which we each explain through personal testimonies. This event is made possible by support from the Ida Halpern Fellowship and Award from the Society for Ethnomusicology (SEM) and the University of California, Riverside Costo Endowment and Luke Madrigal Initiative.

As an adopted queer person, Jessica Margarita Gutierrez Masini is reconnecting to Mexican and Indigenous mixed ancestry and does not claim a Tribal Nation or affiliation. Her identity as a detribalized accomplice is grounded in conversations that she’s had in community with trusted Elders who understand the density of Indigeneity for those of Mexican ancestry and living in the United States. Week by week, she is held accountable by her Danza group, Kapulli Teuxihuitl, (an intertribal Indigenous music, dance, and spiritual group practice from México) and the powwow communities she serves. While earning her doctorate in Ethnomusicology at UC Riverside, she strengthens the links between decolonizing research and supporting Indigenous self-determination. Photography by author.

Will Madrigal (Cahuilla, Luiseño) is currently a doctoral candidate in Native American Studies at UC Riverside. He identifies with both Cahuilla and Luiseño Nations but grew up on the Cahuilla reservation in Anza. In 2017, he started graduate school the same year as Joshua Little, and a year after Jessica Gutierrez Masini. We have taken graduate seminars together, cowritten grant applications, and Jessica and Joshua learned Cahuilla language, culture, and history in the new language series Will taught. Photograph taken from Facebook profile picture with permission.

Overall Prince Dante Lauren, of the House of Lauren, International, also known as Cuauhtémoc Peranda (Mescalero-Apache/Mexica-Chichimeca) is a doctoral candidate in Critical Dance Studies at UC Riverside. As a self-identified Two-Spirits Butch Queen Voguer from Santa Cruz, and as a lifelong Danza practitioner, they have longstanding relationships with diverse “Urban Indian” communities around the globe. After meeting at Native American Student Programs (NASP) events, Cuauhtémoc and Jessica quickly bonded over tackling coursework, exams, and dissertation writing as queer brown peoples in academia. Photography by George Ochoa and Glam by Vivian Lauren.

Josh Gonzales (Xictlaka/Mexika) is a UCR alumnus and has served as the Director for the Native American Student Programs office since 2005. While hanging at the Native American Student Programs (NASP) office and volunteering at events, Jessica learned from Josh about his life experiences and his ideas regarding Indigeneity across the U.S./ México border. For over thirty years, Josh has been practicing Danza, the last fifteen in Kapulli Teuxihuitl with his wife, learning Nahuatl language, and raising their two children in ceremony. Photograph taken from NASP website with permission.