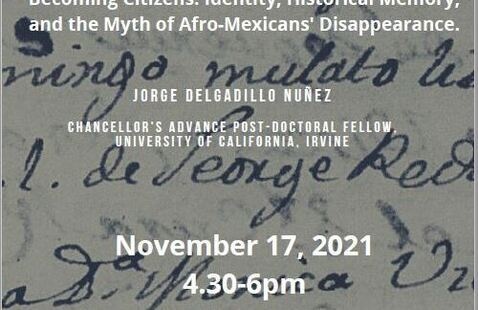 Despite the recent efforts from scholars, activists, and associations to rethinkAfro-Mexican identities and recover their histories, it is still common to hearamong non-specialists statements such as “there are no blacks in Mexico,” oreven “there were no blacks in Mexico.”
How did this happen? When did
colonial social classifications such as negro,mulato, morisco, or lobo stop being used?
How did the homogenous label of“citizens”
become the replacement for these adscriptions?
And what wasthe relationship between this process and the elision of Afro-Mexicans fromthe historical imaginary of the nation over time?
Using the case of Afro-Mexicans from Guadalajara between the seventeenthand nineteenth centuries, this presentation demonstrates that Afro-Mexicans strategically appropriated Spanish terminology about humandifference, used the terminology to carve a social space for themselves, andultimately dismissed it before independence as they were exposed toemerging political opportunities.

Register in advance for this meeting:
https://ucr.zoom.us/meeting/register/tJAscuyprT0vGdadScVbc0E_EgToCds8ozUW

After registering, you will receive a confirmation email containing information about joining the meeting.