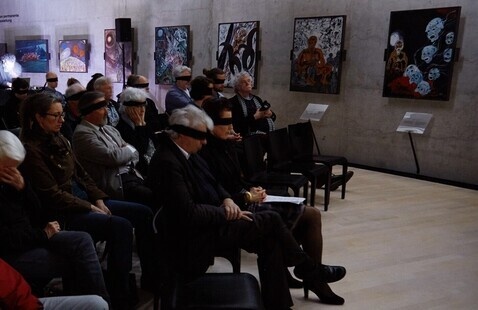 The lecture develops around an overview of a research based on sonic arts and perception. The investigation starts with a residency at the Brain Mind Institute in Switzerland, where I was immersed in a research group exploring out of body experiences. It includes also a residency in the silicon valley for a specific art & science research with a group of scientist and artists. A body of work has been developed in order to explore perception, embodiment and visual mental imagery as mental phenomena within the sonic arts through compositions and sound installations, coupled with theoretical research. The lecture will provide contextual background with important references for art and science research, and pioneers operating within such domain.

Luca Forcucci’s research observes the perceptive properties of sound, space and memory. The field of possibilities of the experience is explored as the artwork. In this context, he is interested in perception, subjectivity and consciousness. A great influence is the late American avant-garde composer and musician Pauline Oliveros and her concept of deep listening expanded to all what is humanly possible to listen to. Since 2008, he collaborates with scientists in the field of neuroscience, perception and biology. Forcucci achieved a PhD in Sonic Arts from De Montfort University and a MA in Sonic Arts from Queens University of Belfast. He studied electroacoustic music with the Swiss composer Rainer Boesch in Geneva, and was produced, by Al Comet, former member of The Young Gods. Forcucci has an extensive background in architecture informed by twenty-five years of professional practice. His research was conducted at Berlin University of the Arts and Electronic Music Studio at TU Berlin, INA/GRM Paris (Institut National d’Audiovisuel / Groupe de Recherches Musicales) while investigating at Bibliothèque Nationale de France François Mittérand. At the Brain Mind Institute in Switzerland he explored cognitive neuroscience of out-of-body experiences. The artworks are presented worldwide on a regular basis The compositions are released by Universal music, Cronica Electronica in Porto and Subrosa in Bruxelles. The works are in the collections of the Swiss National Library, Fine Arts Department of Jura Canton in Switzerland, Swatch Art Peace Hotel Shanghai in China, Djerassi Foundation in San Francisco, Red Bull Station in São Paulo.