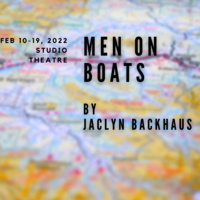 Men on Boats, a play by Jaclyn Backhaus

MEN ON BOATS
by Jaclyn Backhaus

Ten explorers. Four boats. One Grand Canyon. Men on Boats is the true(ish) history of an 1869 expedition, when a one-armed captain and a crew of insane yet loyal volunteers set out to chart the course of the Colorado River.

This play contains cursin' and drinkin'

Please join us for a talkback with the dramaturg and members of the cast and production team following the November 18th performance.