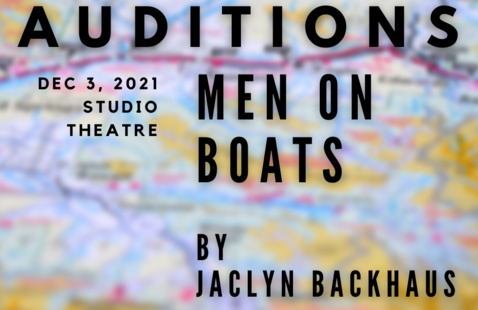 https://theatre.ucr.edu/ #tfdpmenonboats
View map
Add to calendar
Save to Google Calendar Save to iCal Save to Outlook

MEN ON BOATS by Jaclyn Backhaus
Directed by Hannah Wolf

Ten explorers. Four boats. One Grand Canyon. Men on Boats is the true(ish) history of an 1869 expedition, when a one-armed captain and a crew of insane yet loyal volunteers set out to chart the course of the Colorado River.

This play contains cursin’ and drinkin’.

Meet the Director (Zoom): Hannah Wolf will be holding a “meet the director” session on Wednesday, December 1st from 6:30-7:30pm in Zoom. This is not required, but you are welcome to come say hello and ask questions about the show. If you want to attend the meet-and-greet please email Jordyn McEvoy, Stage Manager: jmcev002@ucr.edu, for the Zoom link.

Tips for the audition:

John Colton “Jack” Sumner - Former soldier, current explorer. Widely known to be the Bear Grylls of the 1860s. Sumner went snowshoeing through the Rocky Mountains in winter because “no one had done it yet.” Obviously, he survived.

William H Dunn - Hunter and trapper. Has more outdoor experience than most, but is often ignored. An innovator. Dunn wears beaver skin always.

Walter H Powell “Old Shady” - Powell’s older brother, Civil War vet, oldest crew member. Unclear if he was addled by the war, or if he’s always just been a little weird. He does not like people.

Frank Goodman - British, so excited and here for adventure! (Doubles with Mr. Asa).

WR Hawkins - The cook, but not great at it.

Bradley - Lieutenant, manic with youth. Youngest member of the expedition.

About the play:
In 1869, ten explorers set off to chart the Green and Colorado Rivers, under the guidance of John Wesley Powell, a one-armed Civil War Veteran and personal friend of President Grant, a government-sanctioned journey following in the footsteps of the deserters, lone adventurers, and countless indigenous people who have previously braved the wild rapids leading through Colorado, Utah, and New Mexico, and through the most dangerous waterway of all: the Grand Canyon. Along the way they make friends, they get on each other’s nerves, they suffer loss of boat and supplies, they doubt, struggle, and name mountains after themselves, they posture and pretend, they quit while they’re ahead, and they repeatedly brave dangerous rapids to reach the other side. As boats capsize and supplies are lost, as belts tighten and nerves fray, the company draws together as a band of brothers, even as three members fear the outcome of the final waterfalls and make the fateful decision to leave before the end. In Men On Boats, Jacklyn Backhaus’ original, hilarious, and delightful adventure dramedy, the conquering men out to chronicle the land in service of America, God, and Manifest destiny, are given voice and movement by actors who are anything and everything but white and male, and the bravery, determination, foolishness, humanity, and true grit of the historical explorers is memorialized, while the historical moment of their journey is viewed with a critical lens.