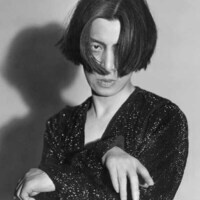 New Research in Dance - NATIONAL BODY. Tara Rodman. Being a National Body: Itō Michio and the Performance of Kokutai

Speaker: Tara Rodman
Assistant Professor, Drama Department, UC Irvine
Being a National Body: Itō Michio and the Performance of Kokutai
The career of dancer Itō Michio suggests a reconsideration of the Japanese concept of kokutai, or “national body,” to account for its literal, embodied significance.

The modern dancer and choreographer Itō Michio spent the 1930s living in Los Angeles and traveling to Mexico and Japan. In each place, Itō’s dancing body emerged as a flashpoint for spectators to construct differing notions of national belonging and identity. One way we might understand the competing audience formations provoked by Itō’s performances is through the Japanese concept of kokutai.Kokutai(国体) is usually translated as “national polity,” “national sovereignty,” or “national essence.” But most literally, it should be understood as “body politic” or “national body” because it is made up of the written characters for “nation” and “body.” This talk uses the example of Itō and methods of dance history studies to ask what it might mean to be a “national body,” suggesting that kokutai was not simply a metaphorical concept, but wielded power through its corporeal, embodied significance.

Tara Rodman is an assistant professor in the Drama department at UC Irvine. She received her Ph.D. from Northwestern University in 2017. A recipient of fellowships from the Fulbright and Nippon Foundation, her research has been published in Theatre Journal and Theatre Research International. Her book manuscript, Performing Exceptionalism, works at the intersection of dance and theatre studies, and of Japanese and Asian American studies, to examine the career of Ito Michio as a figure of racial exclusion and modernist community.

Linda Tomko’s current research focuses on dance in early 18th-century France and England, exploring ways it made cultural meanings and how it engaged with Mediterranean contests and cultures.  For this work, she draws on methods of historical and theoretical inquiry and embodiment of dances past. Tomko’s creative work includes performance as a soloist and dance direction of ensembles for productions at the Berkeley Early Music Festival, the Utrecht Early Music festival, with the LA Chamber Orchestra, and the Thornton Baroque Sinfonia. She is a member of the Studies in Dance History Editorial Board for the Dance Studies Association and a Past President of the Society for Dance History Scholars.

Presentations are followed by dialogue with audience, then reception on the patio.
INFORMATION: (951) 827-3245 performingarts@ucr.edu www.dance.ucr.edu