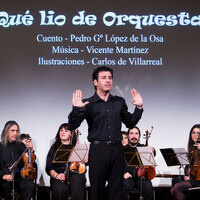 Musical stories in Western art music have been developing for two primary performance venues: in a concert hall or within a classroom. While each approach shares certain different and/or overlapping features, both also share—and more importantly— are linked by one fundamentally important element: educational goals. However, these types of works have not been extensively explored beyond its implementation within the classroom where research mainly focuses on its benefits and applications as an educational tool. There is not a definition from musicology that could embrace both fields, nor is there research examining the relationship between these two fields and the different approaches they offer. Critical analysis on the way educational goals are implemented are also missing. While there are several and different types and approaches of musical stories, they are not categorized and therefore have no catalogue or database for music concert hall that could help evaluate this genre. In addition, there are several ways in which these works are labeled, making the task even more difficult, for example, music stories, music tales, Fairytale, musical story, or even fables. Despite the different origins, approaches, and developments each field offers, both also shows similarities, links, and goals which converge and supplement each other in a rich, exciting, and challenging field of work to be explored. In this paper, I discuss the origin of musical stories from music concert hall realm, suggest a possible term to define these types of works, present the types of musical stories we can find—based on the different approaches adopted by the authors—and a primary integrative definition of the term as music form. I argue that these pieces are, in Western art music, an understudied field, one that links education, literature, and Visual Art to form a unique work.

As a pedagogue López de la Osa has published and written several musical stories such a: The Generous Tree, What a messy orchestra! The cats Quartet, Mrs. Key, the invisible Breeze, Dew the Drop, Maya, Flipi, and Mike playing the guitar, and The Water in the Rain in collaboration with composers such a: David del Puerto, Vicente Martínez, Patrick Gibson or Jorge Taramasco, and the Illustrator Carlos de Villarreal. He also has written pedagogic scripts for the most famous musical stories such a: Peter and the Wolf by Prokofiev, The Carnival of the Animals by Saint-Säens, The Fire bird by Stravinsky, or Babar the Elephant by Poulenc. Some of his musical stories have been published in Spain, Colombia and South Korea by publisher companies such as: SM, Enclave Creativa, Delfín, and Gimm-young. They also have been performed in Spain, Italy, Honduras, Costa Rica, USA, England, and Palestine by orchestras and ensembles such a: Juan Crisóstomo Arriaga Youth Orchestra, OMS Philharmonic Orchestra of Rome, Getafe Symphonic Orchestra, Enara Quintet, Victoriano Lopez Symphonic Youth Orchestra, and the Cuarteto Latinoamericano. In addition, he has taught several professional development courses on the topic for schoolteachers and musician organized by the Madrid Autonomous Community, Alfredo Kraus Auditorium of Madrid, and Edward Said National Conservatory of Music in Jerusalem.

As a professional guitarist, López de la Osa has focused on chamber music, forming a successful duo with the pianist Pablo López de la Osa and the guitarist Paolo Benedetti with whom he has performed in Spain, France, Italy, Czech Republic, Switzerland, Palestine, Ecuador, Costa Rica, USA, and Poland. He also enjoyed performing with many duos, trios, quartets, as well as orchestras with recordings for Radio Spain, Canal 7-Costa Rica, and RTVE. He has given masterclasses and conducted in widely varied nations such as: Costa Rica, Italy, Switzerland, Ecuador, United States, Palestine, and Spain. In addition, and as conductor, he has conducted guitar orchestras in Palestine, Ecuador, Costa Rica, Italy, and Spain.

In 2016, López de la Osa was awarded with the Dean’s Distinguished Fellowship Award of the University of California Riverside to pursuit his PhD in musicology where he is currently working on his dissertation titled: Unforgetting the Past: Internal Exiles and the Spanish Avant-garde under the Franco Dictatorship (1939-75) and beyond under the mentorship of Walter A. Clark. He has presented papers at different conferences in United States, Spain, and Australia and published articles in Journals such as: Concerto, Cuatro42 Music Journal, and Il Fronimo. López de la Osa has been awarded for his research with several prizes such as: The Anthony Ginter Award (2021), The Ignus Dahl Award (2021), The Dissertation Year Program Award (2020), and The Manolito Pinazo Memorial Award (2019), as well as several important scholarships from institutions such as Gluck Foundation, AIE, CIS, and the Mutua Madrileña Foundation. Currently. he is also working in his forthcoming book: Otras miradas a Rafael Rodríguez Albert while waiting for the publication of the forthcoming critical edition on two works by the same Spanish composer.