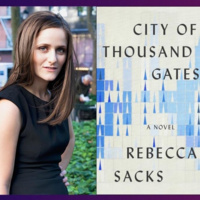 Novelist Rebecca Sacks will read from their novel, City of a Thousand Gates, which The Washington Post says “makes a convincing case for a literature of multiplicity, polyphonic and clamorous, abuzz with challenges and contradictions, with no clear answers but a promise to stay alert to the world, in all its peril and vitality.”

REBECCA SACKS (she/they) graduated from the Programs in Writing at the University of California, Irvine. In 2019, she received a Canada Council for the Arts grant, as well as the Joseph F. McCrindle Foundation’s Henfield Prize for fiction. They have been awarded fellowships from the Bread Loaf Writers’ Conference, the Juniper Summer Writing Institute and the Mellon-Sawyer Documenting War Seminar Series. After graduating from Dartmouth College, she worked for several years at Vanity Fair before moving to Israel, where she received a master’s in Jewish Studies. Her dispatches from Tel Aviv and Jerusalem have been published in journals such as the Paris Review Daily. They live in LA with their dog, Pupik.

Sponsored by the Department of Creative Writing.