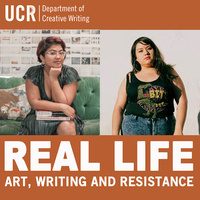 Eva Recinos and Star Montana have made great careers for themselves as writers, photographers and artists in Los Angeles, and they'll share thoughts in conversation with Professor Susan Straight about how to use language, social media, and art to celebrate women, body and storytelling in the world.  They're making it work!

Eva Recinos is the social media manager at the Los Angeles County Museum of Art and a freelance writer. Her writing on art and culture has appeared in The Guardian, LA Weekly, LA Magazine, Jezebel, Bitch, Hyperallergic and more. Her memoir writing and personal essays have appeared in Refinery29, Marie Claire, Catapult and more. She is less than five feet tall.

Star Montana (1987) is a photo-based artist who lives and works in Los Angeles. She was born and raised in the Boyle Heights neighborhood of East Los Angeles, which is predominantly Mexican American and serves as the backdrop to much of her work. Star’s imagery deals with class, social environment, and identity within the personal, her family. Three dots and Tear drops: a long-term project with her family that has dealt with fragmented histories, loss, and the hope of the next generation was on view at the Vincent Price Art Museum and the UCLA Chicano Studies Research Center. More recently, she has begun to work on her themes within a larger scope of Los Angeles residents via portraiture and video. Montana received her BFA from the School of Visual Arts in 2013. Most recently, Montana had a solo exhibition “I Dream of Los Angeles” at Main Museum. Currently, she is pursuing her Master of Fine Arts at USC.