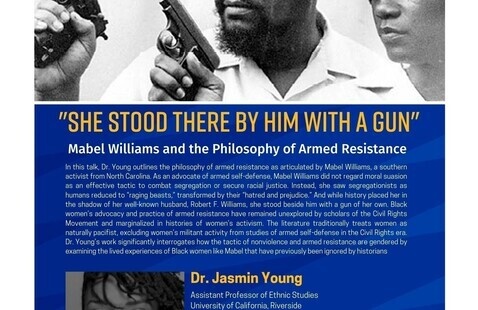 Dr. Young outlines the philosophy of armed resistance as articulated by Mabel Williams, a southern activist from North Carolina. As an advocate of armed self-defense, Mabel Williams did not regard moral suasion as an effective tactic to combat segregation or secure racial justice. Instead, she saw segregationists as humans reduced to “raging beasts,” transformed by their “hatred and prejudice.” And while history placed her in the shadow of her well-known husband, Robert F. Williams, she stood beside him with a gun of her own. Black women’s advocacy and practice of armed resistance have remained unexplored by scholars of the Civil Rights Movement and marginalized in histories of women’s activism. The literature traditionally treats women as naturally pacifist, excluding women’s militant activity from studies of armed self-defense in the Civil Rights era. Dr. Young’s work significantly interrogates how the tactic of nonviolence and armed resistance are gendered by examining the lived experiences of Black women like Mabel that have previously been ignored by historians.