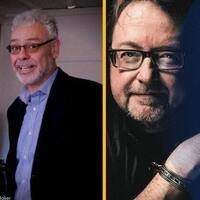 The annual Tomás Rivera Conference, initiated in 1988, honors the legacy of Tomás Rivera by providing an international forum for reflection on the contributions of Chicanos and Latinos in the worlds of the arts, literature, creative writing, culture, business, medicine, and education.

A Reading and Conversation

June 1, 2021
Tuesday 12:00-1:00 pm PST
Our events will be held virtually on Crowdcast.
Please click here for our schedule and to register.
Events are free and open to all.

J.L. Torres is the author of a novel, The Accidental Native; The Family Terrorist and Other Stories; the collection of poetry, Boricua Passport, and Migrations, the winner of the inaugural Tomás Rivera Book Prize (judged by Luis Alberto Urrea). He has published stories and poems in numerous journals and magazines including The North American Review, Denver Quarterly, Hayden’s Ferry Review, Eckleburg Review, Puerto del Sol, Las Americas Review, and the anthology Growing Up Latino.

Born in Puerto Rico, raised in the South Bronx, he lives in Plattsburgh, New York, where he teaches American Literature, U.S. ethnic literatures and creative writing at the SUNY campus there. Besides the PhD, he holds an M.F.A. in creative writing from Columbia University. He co-founded the Saranac Review and served as its Editor for many years. He has no known hobbies, has never been in prison or any gangs, has never had quirky and funky jobs, and is notoriously inept with tools.

His work focuses on the diasporican experience—living in the inbetweeness that forms and informs the Puerto Rican experience in the US and the island. “Through my writing,” says Torres, “I am exploring what it means to live a life yearning for ‘belongingness’ at a time when you’re told nation and home are empty concepts, and you have no historical memory of what they ever meant.” He wants to explore what all of this means in relationships, in everyday moments and transactions, in the workplace, in a world increasingly becoming smaller and where geography cannot ground anything.

Luis Alberto Urrea Hailed by NPR as a “literary badass” and a “master storyteller with a rock and roll heart,” Urrea is a prolific and acclaimed writer who uses his dual-culture life experiences to explore greater themes of love, loss and triumph.

A 2005 Pulitzer Prize finalist for nonfiction and member of the Latino Literature Hall of Fame, Urrea is the critically acclaimed and best-selling author of 17 books, winning numerous awards for his poetry, fiction and essays. Born in Tijuana to a Mexican father and American mother, Urrea is most recognized as a border writer, though he says, “I am more interested in bridges, not borders.”

His newest book, The House of Broken Angels, is a novel of an American family, which happens to be from Mexico. Angel de la Cruz knows this is his last birthday and he wants to gather his progeny for a final fiesta. The novel was released in March 2018.

His collection of short stories, The Water Museum, was a finalist for the 2016 PEN-Faulkner Award and was named a best book of the year by The Washington Post and Kirkus Reviews, among others. Into the Beautiful North, his 2009 a novel, is a Big Read selection by the National Endowment of the Arts and has been chosen by more than 50 different cities and colleges as a community read. The Devil’s Highway, Urrea’s 2004 non-fiction account of a group of Mexican immigrants lost in the Arizona desert, won the Lannan Literary Award and was a finalist for the Pulitzer Prize and the Pacific Rim Kiriyama Prize. The Hummingbird’s Daughter, his 2005 historical novel, tells the story of Urrea’s great-aunt Teresa Urrea, sometimes known as the Saint of Cabora and the Mexican Joan of Arc. The book, which involved 20 years of research and writing, won the Kiriyama Prize in fiction and, along with The Devil’s Highway, was named a best book of the year by many publications.

Urrea has also won an Edgar award from the Mystery Writers of America for best short story (2009, “Amapola” in Phoenix Noir and featured in The Water Museum). Into the Beautiful North earned a citation of excellent from the American Library Association Rainbow’s Project. Urrea’s first book, Across the Wire, was named a New York Times Notable Book and won the Christopher Award. Urrea also won a 1999 American Book Award for his memoir, Nobody’s Son: Notes from an American Life and in 2000, he was voted into the Latino Literature Hall of Fame following the publication of Vatos. His book of short stories, Six Kinds of Sky, was named the 2002 small-press Book of the Year in fiction by the editors of ForeWord magazine. He has also won a Western States Book Award in poetry for The Fever of Being and was in the 1996 Best American Poetry collection. Urrea’s other titles include By the Lake of Sleeping Children, In Search of Snow, Ghost Sickness and Wandering Time.

After serving as a relief worker in Tijuana and a film extra and columnist-editor-cartoonist for several publications, Urrea moved to Boston where he taught expository writing and fiction workshops at Harvard. He also taught at the University of Louisiana-Lafayette.

Urrea lives with his family in Naperville, IL, where he is a distinguished professor of creative writing at the University of Illinois-Chicago.