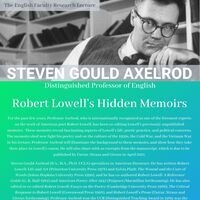 For the past few years, Professor Axelrod, who is internationally recognized as one of the foremost experts on the work of American poet Robert Lowell, has been co-editing Lowell’s previously unpublished memoirs.  These memoirs reveal fascinating aspects of Lowell’s life, poetic practice, and political concerns. The memoirs shed new light his poetry and on the culture of the 1950s, the Cold War, and the Vietnam War. In his lecture, Professor Axelrod will illuminate the background to these memoirs, and show how they take their place in Lowell's canon. He will also share with us excerpts from the manuscript, which is due to be published by Farrar, Straus and Giroux in April 2021.

Steven Gould Axelrod (B.A., M.A., Ph.D. UCLA) specializes in American literature. He has written Robert Lowell: Life and Art (Princeton University Press 1978) and Sylvia Plath: The Wound and the Cure of Words (Johns Hopkins University Press 1990), and he has co-authored Robert Lowell: A Reference Guide (G. K. Hall 1982) and American Poetry After 1945 (Palgrave/Macmillan forthcoming). He has also edited or co-edited Robert Lowell: Essays on the Poetry (Cambridge University Press 1986), The Critical Response to Robert Lowell (Greenwood Press 1998), and Robert Lowell’s Prose (Farrar, Straus and Giroux forthcoming). Professor Axelrod won the UCR Distinguished Teaching Award in 1989, was the first holder of the McCauley Chair in Teaching Excellence in 1999-2002, and currently serves on the Academy of Distinguished Teachers (2013-present).