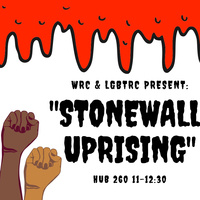 Learn about the trans women of color that set off the gay civil rights movement.

This documentary explores the dramatic event that launched a worldwide rights movement. When police raided a Mafia-run gay bar in Greenwich Village, the Stonewall Inn on June 28, 1969, gay men and women did something they had not done before: they fought back. As the streets of New York erupted into violent protests and street demonstrations, the collective anger announced that the gay rights movement had arrived.