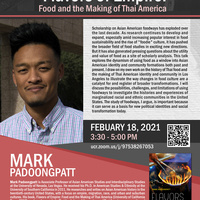 Talk - Flavors of Empire: Food and the Making of Thai America

Flavors of Empire: Food and the Making of Thai America
Talk by Associate Professor Mark Padoongpatt, University of Nevada-Las Vegas.
-----------

"Scholarship on Asian American foodways has exploded over the last decade. As research continues to develop and expand, especially amid increasing popular interest in food sustainability and the rise of "foodie" culture, it has pushed the broader field of food studies in exciting new directions. But it has also generated pressing questions about the utility and value of food as a site of scholarly analysis. This talk explores the dynamism of using food as a window into Asian American identity and community formations both past and present. I draw on my own work on the history of Thai food and the making of Thai American identity and community in Los Angeles to illustrate the way changes in food culture are a catalyst for and register of broader transformations. I will discuss the possibilities, challenges, and limitations of using foodways to investigate the histories and experiences of marginalized racial and ethnic communities in the United States. The study of foodways, I argue, is important because it can serve as a basis for new political identities and social transformation today."

Mark Padoongpatt is an Associate Professor of Asian American Studies and Interdisciplinary Studies at the University of Nevada, Las Vegas. He received his Ph.D. in American Studies & Ethnicity at the University of Southern California in 2011. He researches and writes on Asian American history in the twentieth-century United States, with a focus on empire, migration, race, and urban and suburban cultures. His book, Flavors of Empire: Food and the Making of Thai America (University of California Press, 2017), explores how and why Thai food shaped the contours of Thai American community and identity since World War II. He’s currently writing a book and developing a podcast series on Asian Americans and Pacific Islanders in Las Vegas titled "Neon Pacific," which explores histories of race, space, and placemaking in Vegas.
-----------