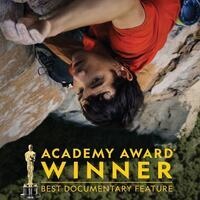 Teen Film Society is a discussion space and community for teenagers to discuss a shared love of film and the arts. Teens will help lead the group and explore themes, ideas, meanings, and other film-related topics. This winter quarter we will explore the documentary Free Solo in which young rock climber Alex Honnold attempts to become the first person to ever free solo climb El Capitan. A central theme of this session will be embracing dreams, polarization, and choices. Common sense media states that the film is suitable for young people aged 11+.

Disclaimer: Parents need to know that Free Solo is a documentary about climber Alex Honnold, who attempts to scale the 3,000-foot El Capitan in Yosemite, California, without any ropes or safety gear. The actual climb itself is a monumental sequence -- and a testament to perseverance -- but other parts of the movie may not sit well with all viewers, including Alex's distant nature and laid-back attitude about death. Still, the film is worth watching for the amazing finale and important questions on life. Expect to hear discussions about death and see the faces of other climbers who fell and died. Language includes the use of "f--k," plus "s--t," "a--hole," and a few others. Alex is shown being affectionate with his girlfriend and preparing to move in together, but there's nothing remotely graphic. Someone makes a spoken reference to cigarette smoking. Free Solo should be viewed close to the date of Film Society. The documentary is available on Disney +, Hulu, and Amazon.