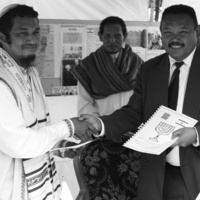 The Lost Tribes of Israel in Madagascar? A Story of 21st Century Judaism

In May 2016, a group of 121 women, men, and children on the island of Madagascar formally converted to Judaism.

The members of the North American Orthodox rabbinical court who conducted the conversions, as well as the organizers of the occasion—leaders of the New York City-based Jewish outreach group Kulanu—had never met any of the individuals scheduled to undergo conversion in person.

Who are the Jews of Madagascar? What is their history? And what do they have to tell us about the future of global Judaism in the 21st Century?

About the speaker: Nathan P. Devir is Associate Professor of Religious Studies at the University of Utah, where he has also served as Director of the Middle East Center and the Religious Studies Program. He has published essays on Jewish Studies in journals such as Biblical Reception, Jewish Culture and History, Journal of Feminist Studies in Religion, Journal of Modern Jewish Studies, Nashim, Religion and the Arts, Studies in American Jewish Literature, and the Journal of the Middle East and Africa. His recent monograph, New Children of Israel: Emerging Jewish Communities in an Era of Globalization, was published by the University of Utah Press in 2017.

The Zoom url will be emailed upon completion of registration