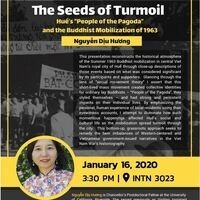 The Seeds of Turmoil: Hue's "People of the Pagoda" and the Buddhist Mobilization of 1963

This presentation reconstructs the historical atmosphere of the Summer 1963 Buddhist mobilization in central Viet Nam’s royal city of Huế through close-up descriptions of those events based on what was considered significant by its participants and supporters. Glancing through the lens of “social movement theory” I assert that this short-lived mass movement created collective identities for ordinary lay Buddhists – “People of the Pagoda”, they styled themselves – and had strong and persistent impacts on their individual lives. By emphasizing the personal, human experience of local residents using their eyewitness accounts, I attempt to illuminate how such momentous happenings affected Huế’s social and cultural life as the mobilization spread turmoil through the city. This bottom-up, grassroots approach seeks to remedy the twin imbalances of Western-centered and
Vietnamese government-issued narratives in the Viet Nam War’s historiography.

Nguyễn Dịu Hương is Chancellor’s Postdoctoral Fellow at the University of California, Riverside. She served previously as Visiting Assistant Professor of History at Haverford College. She earned her Ph.D. and M.A. degrees at the University of Washington with a concentration in the history of modern Viet Nam. Her work focuses primarily on the social history of Viet Nam and the human dimension, in particular the voices and experiences of ordinary people during the Viet Nam War. Nguyễn is developing her dissertation research into a book manuscript, entitled Eve of Destruction: A Social History of Viet Nam’s Royal City, 1957-1967.