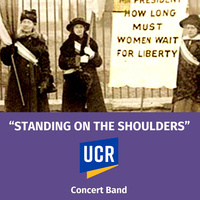 “Standing on the Shoulders”

November 21, 2020
Saturday, 6:00 P.M. Pacific Time (US and Canada)
• Zoom and Livestream to the UCR Concert Band Facebook page @UCRConcertBand
Free and open to the public.

Please register in advance for this performance and livestream:
https://ucr.zoom.us/meeting/register/tJ0vcumvqDItH9VZjpE08dbkSiu9bLA-Vmo1
After registering, you will receive a confirmation email containing information about joining the meeting.

Join the UCR Concert Band for its season-opening program celebrating the 100th anniversary of the 19th Amendment and women’s constitutional right to vote. After 144 years of perseverance and courage from countless suffragists fighting enormous political challenges, more than 26 million women were given access to their essential right to vote. We pay tribute to the trailblazers and visionaries and honor the stories and contributions that impacted our nation and draw greater awareness to the role each of us has in creating change in our communities. The concert will explore the historic Suffragist movement and how it inspires us in 2020 to seek greater civic engagement and equity.

The program features a world-premiere performance of “Standing on the Shoulders” by American composer, singer, songwriter, actor, educator and creator of the Earth Mama® music projects, Joyce Rouse, arranged by American conductor, arranger and transcriber of music for wind band, William Johnson.

In August, 1995 the United States celebrated the 75th anniversary of the 19th Amendment. Joyce Rouse wrote and performed the official theme song, "Standing on the Shoulders", which was featured at official events in Washington D.C. commemorating this landmark movement. The song has achieved even larger audiences with the Suffrage Centennial in 2020, including the dedications of new women’s monuments in Virginia and Tennessee.

Enjoy a post-concert chat and Q & A.

* The licensing and rights to perform this world premiere were sponsored by Rouse House Music, LLC.

To learn more about the UCR Concert Band, visit: https://music.ucr.edu/ensembles/concert-band/

• The UCR Department of Music 2020-2021 Season presents virtual concerts, lectures, and presentations of academic research by Department of Music faculty, postdoctoral researchers, students, and international guest artists and scholars. Free and open to the public.

Joyce Johnson Rouse (aka Earth Mama) is a singer, songwriter, actor, educator and creator of the Earth Mama® music projects. She addresses the critical issues facing our planet, as inspired by her love of Earth and Cosmic history. Her songs are heard world-wide through broadcast media, at Earth Mama concerts, and on her 14 CDs which now play on six continents.

Her music has been used extensively in educational venues and by international environmental and peace organizations such as the United Nations, UNESCO, and the International Earth Charter, as well as The Smithsonian Institution.

Rouse is a native of Cresco, Iowa, graduate of Iowa State University, and earned a Master of Arts in Earth Literacy from St. Mary-of-the-Woods College in Indiana.

Recently released, her homage to the tireless work of the suffragists, HerStory has received acclaimed reviews for visionary songs honoring the lives of ordinary women doing extraordinary work. She performs and speaks regularly at a wide variety of venues. Rouse’s music, as artist Earth Mama, can be heard on most streaming platforms and found at www.EarthMama.Org. She is a 22 year professional voting member of the Grammy Recording Academy.

She weaves threads of science, spirit and art into her music and continues to write works in many styles with one goal in mind: “Helping Heal the Planet One Song at a Time.”

He is Past President of the World Association for Symphonic Bands and Ensembles (WASBE).  He also serves as a consultant for World Projects International Music Productions.

As an arranger and transcriber of music for the wind band, Johnson’s works have been performed by wind bands from many countries. As a guest conductor, lecturer and clinician, Johnson has conducted wind ensembles and orchestras in the United States, Canada, Japan, Germany, France, The Netherlands, Czech Republic, Great Britain, Switzerland, Austria, New Zealand, Australia, Hong Kong, Israel, Korea, Singapore, China, Hungary and Ireland.

Johnson was elected into the American Bandmasters Association (ABA) in 1984 and served as host for both the 73rd and 82nd ABA conventions held in San Luis Obispo in 2007 and 2016. In March 2014, he was elected to the ABA Board of Directors. He is also a member of the College Band Directors National Association and is past President of the Western Division. He is a life member of Kappa Kappa Psi national band fraternity and was the Sponsor of Cal Poly’s Iota Pi Chapter. He served as Kappa Kappa Psi‘s national Vice President for Professional Relations. Johnson is a member of the San Luis Obispo Rotary Club and serves as member of the Board of Directors of Opera San Luis Obispo.

In 1962, he received his Bachelor’s Degree in music from the Indiana University School of Music. While at IU, he studied euphonium with William Bell, former tuba virtuoso of the New York Philharmonic Orchestra and the Sousa Band (1902-1971). After serving as Director of Bands at Seeger Memorial High School in West Lebanon for three years, he joined the band staff at The University of Michigan. While at the U of M, he studied conducting with Dr. William D. Revelli (1902-1994) and Elizabeth A. H. Green (1906- 1995) while earning his Masters Degree in music.

He was selected as one of three Distinguished Teachers at Cal Poly. Recently, he was presented the Lifetime Achievement Award by the California Band Directors Association and received the Distinguished Service to Music Medal from Kappa Kappa Psi. Johnson is a native of Crossville, Tennessee.

In January 2020, Lauren was appointed Director of the University of California, Riverside Concert Band. Previously, she served as Artistic & Ensembles Director of Young Musicians Foundation, Assistant/Cover Conductor of Opera San Luis Obispo, Assistant Director of the Yevshan Ukrainian Vocal Ensemble (Hartford, Connecticut), Guest Conductor of the Westlake Village Symphony (Westlake Village) and Guest Conductor of the San Luis Obispo Wind Orchestra. For the 2019-2020 season, Lauren was awarded Conducting Fellow with the Allentown Symphony Orchestra (Allentown, Pennsylvania). Her multifaceted work has provided her opportunity to appear in concerts and music festivals throughout North America and Europe.

Lauren holds a Master of Music degree from The Hartt School (West Hartford, Connecticut), graduating as a member of the Pi Kappa Lamba National Music Honor Society, and a Bachelor of Arts in Music from California Polytechnic State University, San Luis Obispo. In addition to her conducting engagements, Lauren serves on the Board of Directors of Chamber Music Palisades and is a member of the Development Committee for the American International Paderewski Piano Competition.