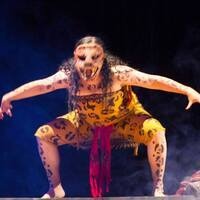 New Research in Dance - Gloria E. Chacón. Ajchowen’s Embodiment of Kab’awil: Revising the Past to Change the Present

Ajchowen’s Embodiment of Kab’awil: Revising the Past to Change the Present

This presentation will focus on Ajchowen, a group of indigenous women performers in Guatemala, and their first play “Ixkik.” The talk situates Ajchowen within broader cultural resistance efforts of indigenous communities against the encroachment of foreign capitalist mining extraction. Chacón analyzes "Ixkik" through the Mayan epistemological frame of kab’awil. In her book, Indigenous Cosmolectics, she traces kab’awil as an indigenous epistemology, from its origin in Maya people’s recorded observations of the planet Jupiter to its transformation in the late twentieth and twenty-first century as a philosophical analytic that blurs binaries. Reading Ajchowen’s play “Ixkik” through kab’awil allows Chacón to move away from what Mark Rifkin calls settler colonial time to an insistence on a Mayan temporality. She underscores that the performers embody two different temporalities at the same time. They do so literally by impersonating female ancestors and other Maya women activists in the present. This double temporality allows them to re-write past history and record the feats of activist women who will not be part of the official annals of the nation-state. Kab’awil or the double gaze allows women to redress the past and underline women’s agency.

Gloria E. Chacón is Associate Professor in the Literature Department at UCSD. Both her research and teaching focus on indigenous literatures, autonomy, and philosophy. She is the author of Indigenous Cosmolectics: Kab’awil and the Making of Maya and Zapotec Literatures (2018). She is currently working on her second book tentatively titled Metamestizaje, Indigeneity, and Diasporas. She is co-editor of Indigenous Interfaces: Spaces, Technology, and Social Networks in Mexico and Central America by Arizona Press (2019). She is also co-editing an anthology Teaching Central American Literature in a Global Context for MLA’s Teaching Options Series. Chacón’s work has appeared in anthologies and journals in Canada, Colombia, Germany, Mexico, and the United States. She has co-edited a special issue on indigenous literature for DePaul University's academic journal, Diálogo.