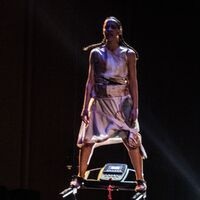 THE MOVEMENT UNDERCOMMONS: FUTURE ARCHIVES, Or, Motion Capture as Technology of Resistance

As a dance-maker, public intellectual, and activist, Grisha Coleman brings together contemporary choreography and digital media to interrogate the pressing issues of the day. Her five-part echo::system project (2005-present) assembles dance, sound/visual media, and computational platforms to highlight the effect that humans are having on the environment. Her most recent work draws on systems of movement to capture and analyze vernacular movement, individual movement identity, and embodied cultural experience. This work proposes the creation of an open-source movement repository – a platform for assessing a range of individual movements and cultural migrations. This same work allows for the analysis of populations as diverse as refugees in Greece, students in dance studies, and migrating citizens of post-apartheid South Africa. In describing these two projects, Coleman's talk demonstrates how collaborations based in dance and dance studies work with anthropology, cultural geography, and engineering.

Grisha Coleman is a time-based artist working in performance and experiential media. She holds a faculty position of Associate Professor of Movement, Computation and Digital Media in the School of Arts, Media and Engineering, with affiliations in Schools of Dance, Design and Future Innovation in Society (Arizona State University). Her art and research project, echo::system, is a springboard for re-imagining environmental change and environmental justice. An instantiation of this work, "treadmill dreamtime running in place" was presented at the Yerba Buena Center for the Arts as part of their main stage Performing Arts season, supported by residency commissions at the Maggie Allesee National Center for Choreography, and Abrons Art Center (NYC) 2016. Her research in movement and somatic methods supports her transdisciplinary research; she is a member of The International Somatic Movement Education & Therapy Association, and works with modalities of Body-Mind Centering™ and The Feldenkrais Method™. Born and raised in New York City, she has had a wide range of experience and training in art making practices; in dance creation and performance, music performance and composition, with improvisational forms in both. Her work has been presented and supported nationally and internationally by numerous grants and awards including: 2014 Thriving Cultures Grant from the Surdna Foundation, 2014 Alpert Award nomination in Dance, 2012 National Endowment for the Arts Arts in Media Grant. Other notable awards and honors include: Rockefeller Multi-Arts Production Fund, Creative Capital Foundation, Jerome Foundation, and New York Foundation Artists' Fellowship. She has produced and conducted numerous collaborative residencies, along with invitations to arts residencies including: Pioneer Works/the New Museum (New Inc.), [2017], Alpert/MacDowell Fellow in residence at the MacDowell Artist Colony [2015], the Rockefeller Foundation Bellagio Center in Bellagio, Italy [2015], and the 2014 Mohr Visiting Artist at Stanford University.

Presentations are followed by dialogue with the audience.
INFORMATION: mariafc@ucr.edu dance.ucr.edu