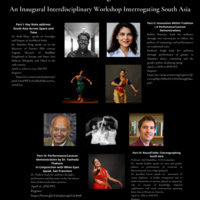 South Asia Research Initiative (SARI) is constituted by UCR graduate students in the Departments of Dance, English, and Ethnic Studies who work on South Asia/ South Asian American Literary and Cultural Studies. This event is the inauguration of SARI through which we aim to bring multifarious concerns to the fore, especially as we negotiate our own relationship to South Asia. While we currently study in U.S. institutions, some of us are international students and others are American citizens. Outside of the dictates of such categories, we harbor joyful and complicated relationships to the many places we might call home. For us, a conversation on South Asia is not only open ended and embedded in social redistribution but is incomplete without a consideration of what it means to come together under identities like South Asian, Caribbean, or South Asian American and terms like ‘diaspora’.

PART I - Keynote address: South Asia Across Space and Time

Participation in the writing workshop will be extended to graduate students across UCR working on South Asia and South Asian American cultures.

Rohini Banerjee leads her audience through new movements in Odissi, the politics of costuming, and performances on traditional texts.
Learn more

Kankana Singh leads her audience through performance of gender in Manipuri dance, costuming and the gender-politcs of playing 'pung'.
Learn more

Dr. Jonathan Eacott, Associate Professor, Department of History, UCR
speaks on movement of Asian elephants, as bodies transported and as bodies themselves in motion, played an important role in circuits of knowledge, imperial exploitation, and racial constructions spanning from Asia to Britain to America.
Learn more

Dr. Thakore leads her audience through a performance and discussion on her hereditary dance Kalavantulu dance practice.
Learn more