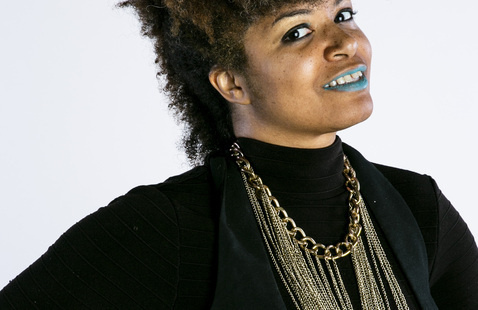 Towards Antiracist Futures of Dance in the Post-Pandemic Academy

Recently, dance organizations and institutions across the country have pronounced themselves in different forms against historical social and racial injustice. They have drafted values intended to prompt commitments to fighting against systemic racism and social marginalization. The colloquium and the Schlundt Lecture are motivated by the premise that in order to implement structural changes there must be a radical change on how we have learned to think, be, feel, care, do, and make in the world and in relation to one another. Presenters will be sharing their radical imagination as we keep the fire burning and the momentum going toward envisioning and building a more equitable and antiracist (dance) world.

Register in advance for this series (one link for all presentations):
https://ucr.zoom.us/meeting/register/tJMrd-uvqDMqHNT24cUrjoAOV6jJ4lSGa9pq
After registering, you will receive a confirmation email with information about joining the presentation.

This presentation will explore African/African Diasporic Dance as Afrofuturist Practice. A practice of freestyle movement and dance style juxtapositions will be explored as space/time transformations.

Ytasha L. Womack is an award-winning author, filmmaker, independent scholar, and dance therapist. She is a leading expert on Afrofuturism and lectures on the imagination and its applications across the world. Ytasha was honored among DesignHub’s 40 Under 40 designers for social good and innovation in 2017 and listed as a Filmmaker to Watch in the Chicago Tribune. Her book Afrofuturism: The World of Black Sci Fi and Fantasy Culture (Chicago Review Press) is the leading primer on the subject and taught in colleges and universities. Afrofuturism is also a Locus Awards Nonfiction Finalist. She is an inaugural resident with Black Rock Senegal helmed by celebrated artist Kehende Wiley, was a creative in residence with Kickstarter Spring 2019 and was a writer-in-residence with Emerson College in Boston Fall/Spring 2018-2019. She recently completed a writing residency in October 2020 as a Writer on the Bloc with Writers on the Wall (WOW) in Liverpool, England.

A prolific writer, her books include the time travel series the Rayla Universe including Eartha 2198, Rayla 2212 and Rayla 2213. Her Afrofuturism novella series A Spaceship in Bronzeville (Mouse Books) was created during her creative in residence with Kickstarter. She’s also author of the nonfiction works Post Black (Chicago Review Press), and Beats Rhymes and Life: What We Love & Hate About Hip Hop (Random House). Her graphic novel epic BLAK KUBE (Megascope), illustrated by Tanna Tucker, debuts in 2022.

Ytasha is director of the Afrofuturist dance film A Love Letter to the Ancestors From Chicago. The film was televised on WTTW Chicago and screened at the Afropunk Festival in Brooklyn; Black(s) to the Future Festival in Paris, France; the Reeltime Film Fest in Nigeria, Afrotopia in Bristol England and the Black Harvest Film Festival in Chicago among others. The film won Best Experimental Film at the Collected Voices Film Fest.

Her other films include the romantic comedy Couples Night (screenwriter) and the documentary Tupac: Before I Wake (coproducer). Her feature films Love Shorts (producer/writer), and The Engagement (director) were nominated for Best Film at the American Black Film Festival. She was nominated for Best Director for The Engagement at the festival as well. Ytasha created and leads an Afrofuturism dance therapy program for teens and adults often providing workshops to high schools, corporations, and museums.

Ytasha has lectured at a number of universities, festivals, and futurist conferences. She gave the closing keynote address at PRIMER 19 and was a featured speaker at MIT’s Beyond the Cradle, The Ecole Nationale Superieure d’Architecture de St. Etienne in France, Sonic Acts Festival in Amsterdam, the Deutsche Kinemathek ‘s Science in Fiction in Berlin, the WOW Festival in Liverpool, and the Acheworks Chicago Series among others. She’s an invited participant in the Decolonizing Mars Unconference at the Library of Congress, a keynote presenter for the Afrofuturism & Indigenous Futurism Conference at the University of North Caroline Chapel Hill, and a keynote speaker for Planet Deep South at Jackson State University. She’s also presented at Duke University, University of Chicago, Clark Atlanta University, Yale University, The New School, Chicago State University, The City Colleges of New York and others. She created and moderated the University of Chicago’s Afrofuturism Symposium, a partnership with the Oriental Institute and the Gray Center for Arts & Inquiry. The event had a special focus on Time Travel and Ancient Egyptian and Nubian art’s influence in comics and Afrofuturism.

She’s a frequent speaker and artist presenter at Comic Cons and science fiction conferences across the US. She’s a two time guest of honor at Convergence Con and a Guest of Honor at Diversicon in Minneapolis, MN.

She also cocurated the Black to the Future Afrofuturist playlist with recording artist Janelle Monae for Spotify.

Ytasha began her career as a journalist covering arts, entertainment and business. She is guest editor for the business magazine NV Magazine; a former editor-at- large for Upscale Magazine and former columnist for the Chicago Defender. Her work has appeared in Essence, VIBE, The Huffington Post and more. A Chicago native, she has a BA in Mass Media Arts from Clark Atlanta University and studied Arts, Entertainment and Media Management at Columbia College in Chicago. She has a Masters Certificate in the study of Metaphysics and New Thought Philosophy from the Johnnie Colemon Institute.

This series is supported by the College of Humanities, Arts, and Social Sciences Dean’s Office Visiting Artist Fund.

As we strive to constantly renew our commitments to social and racial justice as a department, we acknowledge and recognize our responsibility to the original and current caretakers of the land where UC Riverside is located:  The Cahuilla, Tongva, Luiseño, and Serrano peoples (see full land acknowledgement https://dance.ucr.edu/). The life of our department and the upkeep of our facilities are maintained by the labor of so many people we are grateful for. Special thanks to Kathleen DeAtley, Program Promotions Manager, and Lily Chan Szeto, Event Specialist, for contributing their expertise to the production of this Colloquium and Schlundt lecture.