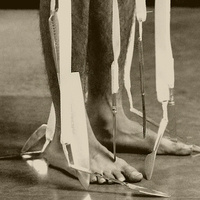 Threat, Defense, and Absence: Ali Moini’s My Paradoxical Knives and the U.S. “Muslim Travel Ban” Shortly after his 2017 inauguration, Trump enacted Executive Orders that restrict travelers with citizenship from specific Muslim-majority countries from entering the United States. Trump’s travel bans construct Muslims as threat and subsequently employ the rhetoric of protecting the common good of Americans (or those who are legitimized as such) as alibis for discriminatory practices against Muslim and Middle Eastern subjects. Because of these visa policies, France-based Iranian dancer-choreographer Ali Moini was unable to fulfill his 2017 residency at the Edelweiss Music & Performing Arts Center (EMPAC) in New York, where he was to perform My Paradoxical Knives. This durational choreography utilizes a costume of straps weighted with metal knives at their ends, which levitate and point at the audience while Moini spins in place in a manner reminiscent to the ritual movements of the whirling dervishes while singing Sufi poetry. Paradoxically, Moini’s costume of knives was able to travel through the United States border, which EMPAC ultimately installed in its center for Moini’s artist talk, while Moini was only able to be present through video chat. For Moini, My Paradoxical Knives conjures questions around threat, otherness, and defense within performance spaces and within larger socio-political spheres. This paper takes Moini’s conceptual lead of threat and defense to think through the choreographic work of My Paradoxical Knives alongside Trump’s Muslim ban and the institutional efforts to bring Moini to EMPAC in the midst of these bans. Using auto-ethnography and choreographic analysis, this paper draws attention to the contradictions of neoliberal freedom and complicates popular multicultural and humanist discourses that construct dance as a universal common experience. Instead, we see that dance does not necessarily “transcend borders” within geopolitical conditions that govern, and ultimately halt, the flow of certain racialized dancing bodies.

Fluid Meaning, Oscillating Diaspora: Embodied Accounts of the Oriental Dancer For professional dancers of Arab descent, do expectations surrounding proper performances of gender and sexuality differ between home and diaspora? How do transnational circulations of dance and dancers influence these expectations and the lived experiences of dancers, over time in both Lebanon and the United States? Drawing from participant observation and interviews with Arab / Arab-American dancers in Dearborn Michigan, Chicago IL, and in Beirut, Lebanon, this paper explores the role of gender and sexuality in informing their experiences as professional dancers, in a transnational frame that includes both Beirut and Lebanese diasporas in the United States Midwest. It engages with the intertwined roles of both the politics of cultural representation within community, and across borders, to better understand the dialogic nature of transnational performance cultures and the shifting valences and expectations surrounding gender and sexual identities that artists must navigate. Here, De la Cruz discusses the attendant implications surrounding morality, class, belonging, as well their individual artistic and diasporic/national identities to argue that these dance artists occupy a singular ethnonational and marginal global diaspora position, where belonging is constantly contested because of dance, but also reinforced by and through their competent artistic dance performances.

Heather Rastovac Akbarzadeh’s research, which extends upon two decades as a dancer-choreographer among Iranian American communities, examines the lives and artistic works of diasporic and immigrant Iranian dancers and performance artists residing in North America and Western Europe. She engages in ethnography, discourse analysis, and performance/movement analysis to investigate the racialized and gendered economies of Iranian performance in transnational art markets and among diasporic audiences. Her research is concerned with how diasporic Iranian performance impacts and is impacted by Euro-American (neo)liberal discourses on freedom, resistance, immigration, citizenship, and the global “war on terror.” Heather earned her Ph.D. in Performance Studies from the University of California, Berkeley with a Designated Emphasis in Women, Gender, and Sexuality. She was the 2016-2018 Mellon Postdoctoral Fellow in Dance Studies at Stanford University. From 2018-2020, she has been a University of California Chancellor’s Postdoctoral Fellow at UC Davis where she has been working on her book manuscript, tentatively titled Choreographing the Iranian Diaspora: Dance and Spectatorship in the Era of War on Terror.

Meiver De la Cruz is a Consortium for Faculty Diversity Fellow in Dance, completing a Ph.D. in Performance Studies from Northwestern University, teaching dance studies, feminist and performance theory, and Arab dance technique. She writes about Arab American movement practices (social, staged, and ritual dance) as well as Arab dance pedagogy in the United States, locating dance as a primary site for the creation, and neoliberal circulation of Arab-American identity. As an artist, she creates works addressing the intersections of globalization, racism, and sexual violence, and has used dance and performance as part of community organizing and empowerment work in community and academic organizations in Cuba, Lebanon, Taiwan, Canada and throughout the United States.