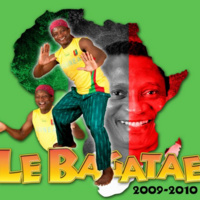 Join host Makeda Kumasi for a free three-week Saturday Zoom Class series in West African Drum and Dance as we engage in strength, wellness and community support that is the Doundounba.

• Register in advance for this festival. Click
After registering, you will receive a confirmation email containing information about joining the festival.

The internationally-acclaimed master dancer, drummer, and choreographer has traveled the globe bringing the colorful musical performance traditions of his homeland to audiences worldwide. Moustapha’s mission is to continue to share his expertise while preserving the richness and authenticity of the culture. He is recognized for his thorough and charismatic technique that is deeply rooted in tradition.

Moustapha was born in 1955 in Conakry, the capital city of Guinea. He is of Baga, Sousou, and Malinke decent. During his childhood he spent time in the village of Kiffinda where he learned to appreciate the history of the Baga people. He started dancing and performing at the young age of 13. He was a dancer with Conakry II under the direction of Sekouba W. Camara from 1969-1975. Moustapha was aggressively recruited into Les Ballets Africains in 1975, where he quickly became principal dancer and drummer. In 1993 Moustapha founded LE BAGATAE DANCE AND DRUM, an authorized dance and drum school in Conakry.

Moustapha was the Associate Artistic Director for Muntu Dance Threatre of Chicago from 2000-2005.  As Artistic Director Moustapha choreographed seven dramatic pieces based on the culture of Guinea West Africa.  In 2006 Moustapha established Won Tan Nara / Ballet Guinean of France in Association with Polyphoniques in France resulting in performances across Europe.

Moustapha Bangoura currently resides in Chicago, where he is Artistic Director with Le Bagatae Dance and Drum Ensemble, and he is also choreographer for Legends of West Africa. He continues to travel and share his knowledge and expertise of traditional dance and drum with students throughout the world.

About Imani Maat
Imani Maat is a former student of UCR’s Department of Dance. After graduating with her BA, she received a scholarship to the Graduate School at the University of Michigan where she became the first instructor of West African Dance for their Department of Dance, while working on her MFA.

Imani has studied West African dance extensively across the country, as well as on the continent of Africa, visiting several West African countries in the last few years. Her documentary film details her recent travels to Guinea and her study with master dancer Moustapha Bangoura.

About Jan Blunt
Jan Blunt, Co-Director of the Institute for Dunham Technique Certification (IDTC), 2018-present, is a native of Cincinnati, Ohio, where she began her dancing and teaching career, as a student of Jane Burkhalter, Ballet Mistress of the Cincinnati Ballet Company. She was also a founding member of Cincinnati’s African American Drum and Dance Ensemble, Espere Liturgical Dance Ensemble and Dansi Jazz Dance Ensemble. She earned her undergraduate degree at Hampton University, where she majored in Mass Communications and Broadcasting, and danced with the school's dance company, the Terpsichoreans. She relocated to Southern California in 1986 and became a teacher in the Los Angeles Unified School District. She has been a student of Katherine Dunham technique for more than 25 years, and is a certified Dunham Technique Instructor. In Los Angeles, Jan has danced with Djimbe West African Drummers and Dancers, Embrasamba Afro-Brazilian Dance Company, and Grupo Afro Bahia Brazilian Dance Ensemble, Sona Sane’ African Dance Ensemble and was artistic director of Abalaye African Dance Ensemble. She earned her Master's degree in Educational Administration at California State University, Northridge. Close proximity to Hollywood has afforded many opportunities, and she has television, movie and music video credits, but she is most proud of her efforts and accomplishments in the education of young people, in academics as well as the arts. Her true joy is L.A.D.D.E.: the Loyola Village African Drum and Dance Ensemble, comprised of children from Kindergarten to fifth grade at her school.  She has been able to provide many unique and exciting experiences for the young drummers and dancers for the last 15 years.

About Makeda Kumasi
Makeda Kumasi is Founder / Artistic Director of The Umoja Ensemble of the Inland Empire (UEIE) and Co-founder of WE 3 PRODUCTIONS. UEIE is a performance group that has been “edutaining ” audiences through an African art aesthetic for over two decades. Makeda has toured with two prominent Southern California based performance companies, Abalaye African Drum and Dance Ensemble, and Niancho Eniyaley African Dance Performers. Makeda holds a Master of Fine Arts from the University of Southern California, and a Master of Education from the University of Phoenix. She teaches West African movement classes in the community and at the University of California, Riverside. In 2014, she received a Professional Development Grant to study West African Dance in Senegal. From her experience, Makeda has written two books: 12 Days in Senegal; An Artist’s Journey, which is a journal of her sabbatical, I See Hip Hop Afrika, a poetry/picture book, as well as produced a documentary short “12 Days in Senegal; An Artist’s Journey, Docu-Journal”.