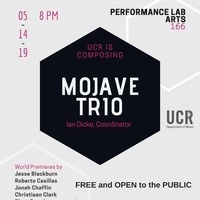 Free and open to the public
Though admission is free, a ticket is required. One ticket per person will be distributed at the venue one hour before the concert. Seating is limited and on a first-come, first-served basis.

Piano Trio No. 1 by Patrick Gibson

C Takes All by Roberto Casillas

The Mojave Trio is known for presenting works from the standard repertoire of the 18th and 19th centuries to new works of our time. The Trio has performed throughout Southern California, including regular appearances on the “Sundays Live” radio broadcast series at the Bing Theater of the Los Angeles County Museum of Art. Other local venues include the chamber music series at Pomona College, Scripps College, UC Irvine, Occidental College, La Verne University, the Restoration Concerts at the South Pasadena Library, Pasadena “Music at Noon,” Trinity Lutheran Church, and the Newport Beach Library.