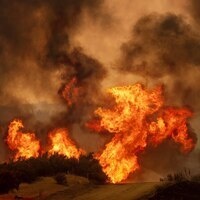 Facing Fire is an exhibition that explores western wildfires as omen and elemental force, as metaphor and searing personal experience. Fire tends to spread. So, too, does the meaning of fire. Sixteen artists bring us photographs, paintings, drawings, ceramic, and video as they face fire, sift its aftermath, and struggle with the implications. UCR ARTS is collaborating UCR’s Department of Music to present original compositions created by students and faculty around artworks found in the exhibition.

The faculty and student composers in the UCR Music Department work in a variety of media drawn from influences that range from hip-hop to experimental electronic music. The approaches for each piece within the Facing Fire project are highly individualized. Some works are fully scored compositions for classical instruments, others use external source material and text taken from other mediums, such as video game soundtracks and news reports. Their compositions are a testament to the importance of expressing one’s creative impulses during times of uncertainty and isolation.

Special thanks to Nikolay Maslov, Curator of Film & Media Projects at UCR ARTS.