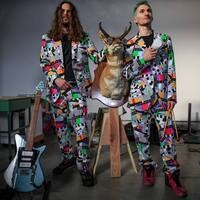 Called “outstanding” by the San Francisco Chronicle, “transcendent” by the Charleston City Paper, and “a fully distorted perpetual motion of awesome” by I Care If You Listen, The Living Earth Show (guitarist Travis Andrews and percussionist Andy Meyerson) is a megaphone and canvas for some of the world’s most progressive artists. One of the premiere contemporary chamber arts ensembles in the United States, The Living Earth Show received the grand prize in the SAVVY Chamber Arts Competition and runner-up in the open division of the M-Prize Chamber Arts Competition, has commissioned and premiered over 60 new works by some of the most vital composers in the world, and released two critically acclaimed albums, and has performed, lectured, and given masterclasses across the country.

The Living Earth Show’s 2018-19 San Francisco season includes several  world premiere variable media productions. The first, “Hyphen”, is curated by composer Farnood HaghaniPour and investigates the sonic unification (if any exists) of Iranian musical artists living in Iran and abroad, featuring new works written by Alireza Mashayekhi, Aida Shirazi, Nima Rowshan, and HaghaniPour himself, presented in conjunction with projected video created by Iranian video artists of the composers’ choosing.  The second, “American Music”, is a show of works written by eight composers illustrating the range of works created within and about the current borders of the United States.  The third, COMMANDO, features works by the ensemble created in collaboration with eight of the most renowned queer and trans vocalists on the west coast, blending rock, metal, spoken word, and chamber music in the service of using traditionally masculine and heteronormative art forms as sites to celebrate and revel in queerness.  The final work, “Tremble Staves”, is a multimedia production created for the ensemble by Raven Chacon and will be presented in the waters of Sutro Baths.  The Living Earth Show will also release its third album, “Echoes”, created in collaboration with Kronos Quartet and Youth Speaks, and serve as artists in residence at the University of South Carolina and the University of Michigan.