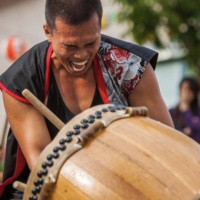 Please register in advance for this event:
https://ucr.zoom.us/meeting/register/tJYlcOyupjwtGNHnWrAEXFS7N29WW0n8Nxc9
• After registering, you will receive a confirmation email containing information about joining the meeting.

Whether Taiko drumming or composing music for chamber and staged concert performances or improvisations, Shih-wei (Willie) Wu has proven himself a fresh face on Southern California’s performancing arts scene. A creatively prolific, Taiwanese-American composer, musician and choreographer, Wu was born in Taoyuan, Taiwan, and grew up in the Los Angeles suburbs.  He received his B.A. and M.F.A. degrees in music from UC Riverside and UC Irvine, respectively. He has studied under the direction of Drs. Byron Adams, Renée Coulombe and Tim Labor, focusing primarily on composition, Japanese taiko, and bassoon performance, as well as ethnomusicology. Additionally, he has worked extensively with composer, shakuhachi player and technologist Kojiro Umezaki of the Yo-Yo Ma Silk Road Ensemble at UC Irvine, and is an alumnus of that University’s student taiko club, Jodaiko.

Currently an active bassoonist and taiko performer throughout the Los Angeles and Inland Empire regions, Wu served in 2010-2011 as president of the Composer’s Collective at UC Riverside, where he premiered several pieces alongside fellow accomplished young composers. Since that time, he has premiered “Zheng,” a self-developed work of Taiko concert theater, and received numerous performances of his works from Riverside to Hollywood. As a performer he has appeared at a wide range of venues including the Grenada Theatre, the Hollywood Bowl and Carnegie Hall in New York.   He appeared in the Cold Play/Rhianna music video “Princess of China,” and on stage with such noted musicians as the Yellow Magic Orchestra and Yoko Ono.

Wu presently serves as the artistic director for the Taiko Center of Los Angeles, performs with the Satori Taiko and Taiko Mix groups, and has been described as a “deeply passionate drummer” by the Los Angeles Times Southern California Moment blog. His main creative interests include engaging themes of intercultural life and migration, musical fusion, queer performance theories and stage works, and an overall integration of Western Classical music, choreography with Japanese classical music practices. He is especially inspired by postmodern connections of culture, technology, jazz and various Western and non-Western musical traditions.

When not actually composing or performing, Wu enjoys presenting on music history and theory as well as their nexus with cultural identity and gender issues.